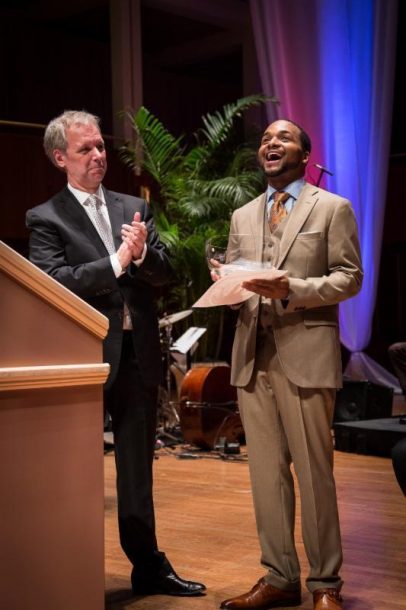 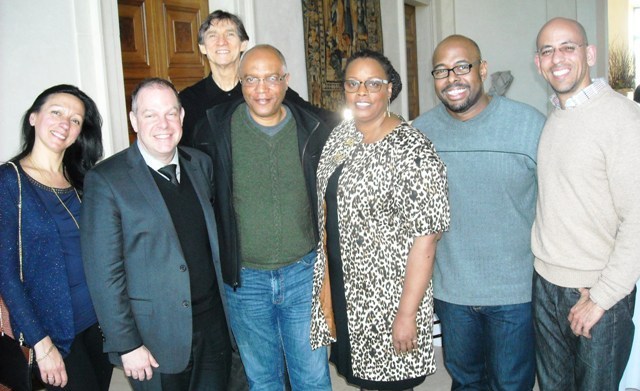 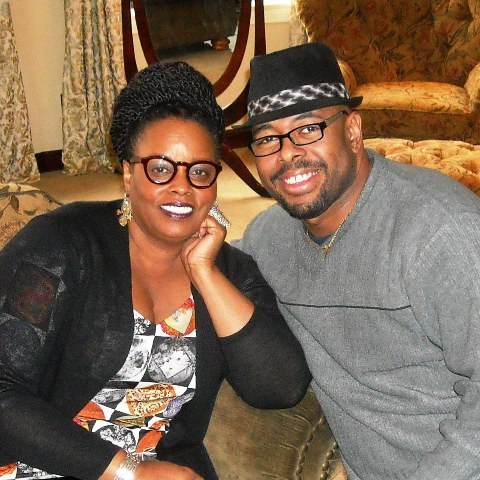 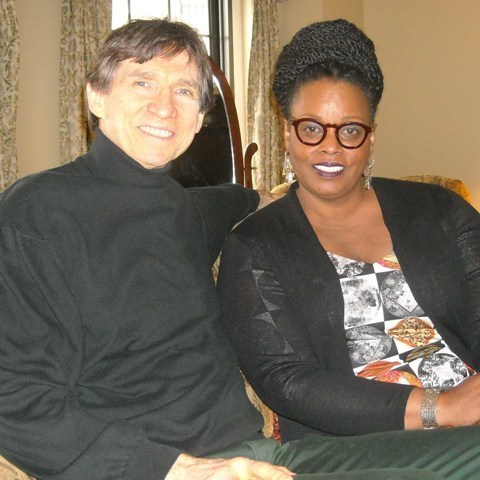 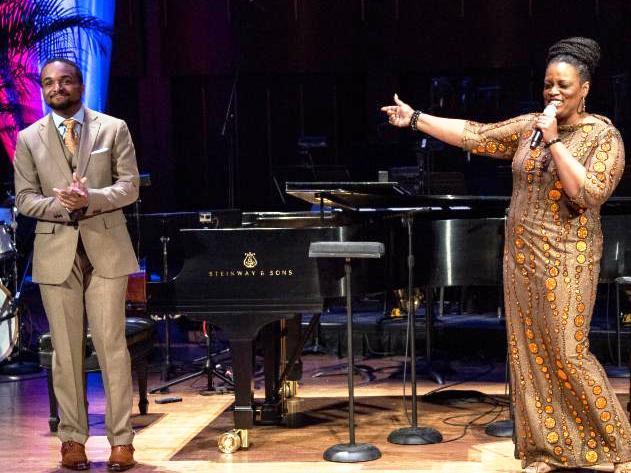 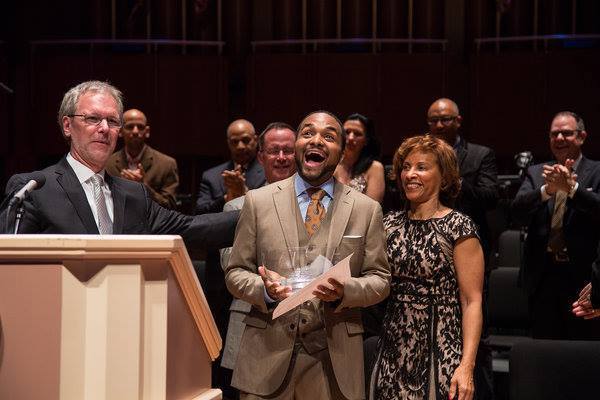 On Saturday night, March 28, inside the beautiful Hilbert Circle Theatre in the center of downtown Indianapolis, Sullivan Fortner was named the winner of the Cole Porter Fellowship for 2015 by the American Pianists Association. The prize is valued at $100,000, including $50,000 in cash, two years of artistic support and the offer of a recording contract with Mack Avenue Records.

The announcement came after a year of live performances as well as civic and educational activities that placed five pianists between the ages of 18 and 30 years in competition. Finalists Kris Bowers, Emmet Cohen, Zach Lapidus, Christian Sands and Fortner demonstrated over the three-plus days of finals and activities that they are all deserving of admiration, acclaim and future success, making the decision of the five judges nearly impossible.

Joel Harrison, the President and CEO of the APA, his staff and the APA board have made this event the premier competition in the world for jazz pianists.

Having served as the emcee of the 2011 edition of the awards and having turned that task over to the esteemed and award-winning bassist, composer, bandleader, educator and broadcaster Christian McBride, I spent the time mingling with everyone involved, engaging in conversation with the great pianists chosen to be judges (Amina Figarova, Billy Childs, Bill Charlap and Edward Simon) as well as McBride and the featured vocalist who performed with the lads during the competition, the elegant Dianne Reeves. (You can hear those conversations on my Voice of America and MOJA Radio programs.)

Reeves and Childs played together in the early stages of both of their careers and remembered that fondly. They also explained how they had both won Grammys this year with similar projects that brought many all-star singers and players from various musical genres together to perform songs not usually heard in jazz projects with excellent results. McBride, embracing his work as a broadcaster, asked a question of some of the pianists sitting together in the hotel lobby: What gig other than jazz would they most like to have had? Charlap, a master of “The Great American Songbook” and jazz from a more traditional approach, quickly answered that he’d have loved to work with Frank Zappa, equating him with any jazz or classical master. Charlap took advantage of a piano that was sitting in the lobby of our hotel that once belonged to the legendary Hoagy Carmichael. He brought the ancient instrument to life several times during the weekend with songs that Carmichael himself probably played and would have been proud to hear.

McBride also told some delightful stories about lessons learned from the great bassist Ray Brown and how working with George Duke was thrilling and exhausting in a recording session for the song “10 Mile Jog,” which went on non-stop for 30 minutes. Figarova, joined by her husband and musical partner, flute player Bart Platteau, explained their recent move from lower Manhattan to their new home in Harlem and how she and Bart had become their own renovation contractors. She also said we should look forward to her forthcoming project with a new sextet. Platteau explained that he plays flute, not “flaut,” and has never understood why anyone would be called a flautist.

Simon was the quietest of the group but said that though he left Venezuela, the land of his birth, many years ago and now calls America his home, he has not lost a musical connection with his homeland. His latest work, the brilliant Venezuelan Suite, is proof of that. He covers the four major styles of music born in Venezuela in the recording. His work in the New York scene from the time he was about 20 with the likes of Bobby Watson, Greg Osby, Kevin Eubanks, Terence Blanchard and many more, in addition to his own work as a leader, has helped establish him as one of the finest players and composers of his generation. He has a new group and hopefully a solo piano work coming in the future he told me.

Returning to the APA Cole Porter Fellowship competition events, the first performances took place at the legendary Jazz Kitchen club, where each of the pianists played three songs with the same rhythm section, a terrific local bassist and drummer. They played one solo piece as well as two with the trio. The performances, played to a packed house, were aired live on local FM station WFYI. The house was cleared and a second audience filled Jazz Kitchen for another set of new songs with equal results.

The following night took us to the stately Hilbert Circle Theatre for the finals, which were webcast on the APA website and broadcast live on local FM station WICR. The night began with each musician performing in a duo setting with Reeves, who announced that she had just returned from Europe and was a bit jet-lagged. She showed no signs of jet lag whatsoever though, and was thrilling from the first note to the last. She chose a series of five standards to perform with the pianists but the songs were assigned randomly to each player. Again, there seemed to be no obvious leader in this setting. The large ensemble from Indianapolis, the Buselli-Wallarab Jazz Orchestra, conducted by Brent Wallarab, took the stage and accompanied the five finalists in the performance of classic songs by Monk, Chick Corea, Billy Strayhorn, Ray Noble (“Cherokee”) and Eden Ahbez’s “Nature Boy.” There was another set of songs including some originals and more standards and by the end of the night I remained completely stumped as to who would or should win. If any of these young men had won it would have been worth celebrating. Each took away a cash prize and the admiration of everyone in attendance. I heard more than once from the stage and in conversation everywhere the same statement: “The future of jazz piano is in good hands!” Yes, indeed it is.

Terence Blanchard looked around the restaurant table and launched into a gentle sermon about jazz education in Detroit that was part homily, part pep talk, … END_OF_DOCUMENT_TOKEN_TO_BE_REPLACED

Creating a program of solo piano music is the ultimate challenge for any improvising pianist. The music on my latest album, Ways of Disappearing (Sunnyside), … END_OF_DOCUMENT_TOKEN_TO_BE_REPLACED

First the good news: As you can see in our annual Festival Guide, there are plenty of jazz festivals scheduled to happen around the world … END_OF_DOCUMENT_TOKEN_TO_BE_REPLACED

Steve Lacy was once a brilliant bebop player. Yet conventional wisdom says the opposite. Many have long argued that a key to the innovative soprano … END_OF_DOCUMENT_TOKEN_TO_BE_REPLACED