Skip to content
Become a member and get exclusive access to articles, live sessions and more!
Start Your Free Trial
Home > Features > Allan Holdsworth: Once Upon a Lifetime 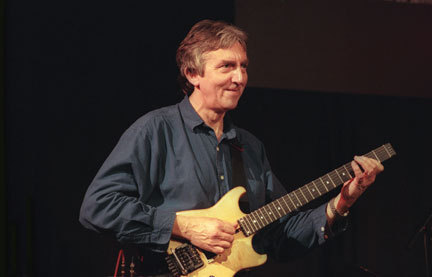 Guitarist extraordinaire Allan Holdsworth remembers getting the call from Tony Williams: It was 1975 and Holdsworth, a Londoner at the time, had already established a fervent underground following in the U.K. for his outstanding fretboard work with such progressive rock groups as Tempest and Soft Machine, though his activities abroad barely raised a blip stateside. All that would change after he joined the ranks of Tony Williams New Lifetime and appeared on the group’s 1975 release, Believe It.

“I was working with a piano player named Pat Smythe and quite often we’d open for groups at Ronnie Scott’s,” recalls Holdsworth. “Chuck Mangione was headlining there with Pat La Barbera on sax, Joe La Barbera on drums and Alphonso Johnson on bass. Chuck got really sick during this engagement, so there were a couple of nights that he wasn’t able to be there and they asked Pat Smythe if he would help out. Pat mentioned to the guys that he knew this guitar player and asked would they let him sit in on one set. So I did.”

Upon returning to the states, Johnson heard that Tony Williams was putting a new band together and remembered the British guitarist he had played with one night at Ronnie Scott’s. He recommended Holdsworth to Williams, which led to the fateful phone call. “Tony asked me to come to Sweden to join him for a recording,” he recalls. “There was Jack Bruce on bass, Webster Lewis on organ and Tequila, who was Tony’s girlfriend at the time, was singing on it. We recorded a bunch of Tony’s tunes there, but I don’t think the album ever came out.”

After that session, Holdsworth went back to London and four months later was summoned once again by Williams. “Tony called me to say he had just got this deal with CBS Records and asked if I wanted to come and join his band. My immediate reaction was, ‘Yes, please!'”

The guitarist flew to New York and stayed in a hotel for a while before eventually settling into the drummer’s Upper Manhattan abode. “It was just me and Tony at first, playing together and developing material,” he recalls. “And then he would invite different bass players over to play. There was an upright bassist named Juno, and then we played with Jaco Pastorius, which was a great opportunity for me. And Jeff Berlin also came up.”

By this time Williams had gotten a demo tape from bassist Tony Newton. “He loved it,” Holdsworth recalls, “and he was determined that this was the guy that we were going to use for the band.”

Williams and Holdsworth went together to check out Newton on a big-band gig at Carnegie Hall. The pianist in the group happened to be Alan Pasqua, who made a favorable impression on both of them. Williams called a rehearsal at S.I.R. Studios in Manhattan, and a band was born. “We started rehearsing new tunes and then a few weeks later we were playing at the Bottom Line,” says Holdsworth. “Shortly after, we did Believe It, then did a couple of tours and followed up with Million Dollar Legs.”

Though short-lived, the Tony Williams New Lifetime made a significant impact on the mid-’70s fusion scene. Now, three decades later, Holdsworth and Pasqua are paying tribute to the late drummer and their former bandleader in a special edition quartet featuring Yellowjackets bassist Jimmy Haslip and drummer Chad Wackerman. The all-star group first documented its explosive chemistry in a concert DVD filmed in 2006 at Yoshi’s in Oakland. A year later, while on tour in Europe, a performance was recorded by a Berlin radio station. That live recording has recently been released on the progressive rock/fusion label Moonjune as Blues for Tony. On this two-CD set, the guitarist unleashes in typically awe-inspiring fashion on Pasqua’s title track and “Protocosmos,” Newton’s “Red Alert,” Wackerman’s “The Fifth” and Holdsworth originals like “Pud Wud,” “Looking Glass” and the anthemic “Fred.”

Currently on a stateside tour in support of Blues for Tony (including a weeklong engagement in January at New York’s Iridium), Holdsworth is quick to cite Tony Williams as not only one of the greatest drummers of all time but also a major influence on his own career. “The great thing Tony did for me was, he would never tell me to do something in a certain way or project an interpretation on anything I was supposed to do. He would say, ‘Just do it how you wanna do it.’ Before that, people would say, ‘Can you do it more like this or more like that?’ and I would generally give them what they wanted. But with Tony, he wouldn’t ever do that. He’d let me find my own way in a piece, even though sometimes he’d leave me out there to hang myself. But that was a huge lesson for me. And now I never tell any of the guys that I work with what to play. I just play them the tune and they kind of interpret it any way that they want.”

At age 63, Holdsworth continues to play like no other guitarist on the planet, closely emulating the spirit of John Coltrane’s “sheets of sound” approach with his horn-like legato phrasing and uncanny ability to blow over the changes. He is currently working on his first studio recording since 2000’s The Sixteen Men of Tain. “It’s got considerably more energy than the last couple of records I did,” says the guitarist. “It’s actually pretty aggressive … for an old geezer.”

When Enrico Rava recorded The Song Is You (ECM), his new album of duets with pianist Fred Hersch, in Lugano, Switzerland, he was just out … END_OF_DOCUMENT_TOKEN_TO_BE_REPLACED

The title of trombonist/composer Kalia Vandever’s second release, Regrowth (New Amsterdam), follows logically from the botanical metaphor of her 2019 debut, In Bloom. The new … END_OF_DOCUMENT_TOKEN_TO_BE_REPLACED

If we’re going out on a limb and calling the music that trombonist, vocalist, and songwriter Natalie Cressman makes—as soloist, as side-and-session person, in a duet … END_OF_DOCUMENT_TOKEN_TO_BE_REPLACED

When Jennifer Hartswick checked into a temporarily shuttered bed and breakfast in the winter of 2021, relaxing and writing were both on the agenda. Spending … END_OF_DOCUMENT_TOKEN_TO_BE_REPLACED