Skip to content
Become a member and get exclusive access to articles, live sessions and more!
Start Your Free Trial
Home > Features > A Night of Improvised Round Robin Duets in NYC 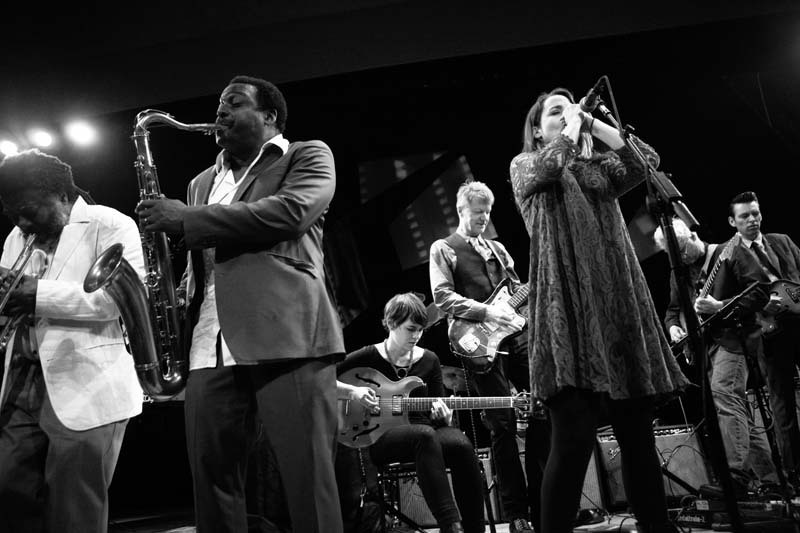 Since 2010, attendees of the annual Undead Music Series in New York have had the opportunity to witness “A Night of Improvised Round Robin Duets,” which co-presenter Adam Schatz describes as “the greatest way to trick a roomful of people into listening to 100-percent improvised music for two hours.” After shuttling among venues, the Round Robin landed this year on May 14 at the Town Hall, a capacious room that would’ve been unbookable if not for the co-sponsorship of the Red Bull Music Academy (RBMA). “We love the historical context of the legendary jazz shows that have happened in that space,” said Undead co-founder Brice Rosenbloom shortly before the event.

This was the first theater-seated show in Round Robin history (they’ve also transpired in New Orleans and Detroit), and like last year’s go-round at Brooklyn Masonic Temple-the first Undead-RBMA collaboration-the span of genres, aesthetic temperaments and even generations was huge. “Allen Toussaint comes from a [New Orleans] background that we haven’t really highlighted much,” said Rosenbloom, “so we’re thrilled that he’s bringing that tradition into the mix. It’s also great having someone like Wadada Leo Smith onstage with younger folks like Jamie Lidell and Daedelus.”

Jim Keltner is, in two words, a legend, since the 1960s one of Americaâ€™s most in-demand session drummers, lending not only impeccable chops but an … END_OF_DOCUMENT_TOKEN_TO_BE_REPLACED

In Lee Danielsâ€™ film The United States vs. Billie Holiday, the words â€śEarle Theater, Philadelphia, May 27, 1947â€ť flash onscreen, and one sees a row … END_OF_DOCUMENT_TOKEN_TO_BE_REPLACED

Jerry Granelli, a jazz drummer and educator noted for his power and sensitivity both at and away from the drum kit, died July 20 at … END_OF_DOCUMENT_TOKEN_TO_BE_REPLACED

A jazz musicianâ€™s legacy can be a multifarious slope. Sometimes itâ€™s defined by contrasting stylistic paths that amalgamate into a career, as with Miles Davis. … END_OF_DOCUMENT_TOKEN_TO_BE_REPLACED