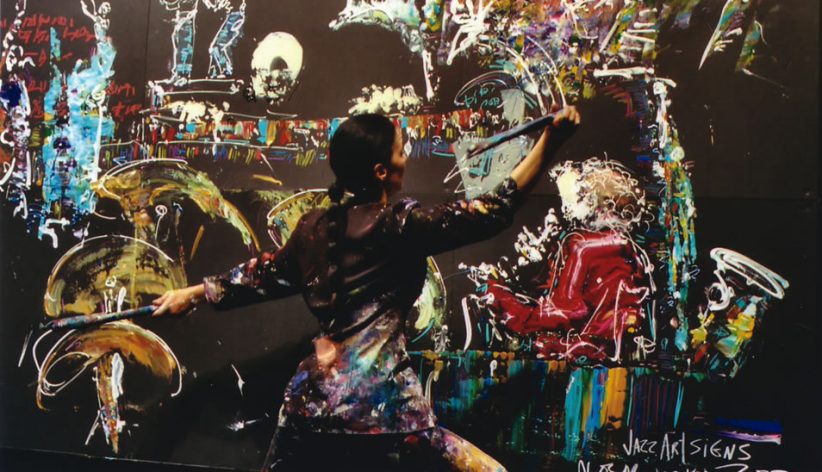 Vocalist and bandleader Lisa Thorson is wheelchair bound, but when she performs with her quintet many people won’t even notice. Instead they’ll focus on the animated motions of improvisational painter Nancy Ostrovsky. Working prominently behind the musicians, Ostrovsky creates a huge painting in sync with the music. Or perhaps they’ll watch an American Sign Language interpreter or the LED live captioning; meanwhile, large-print and Braille programs are also part of the show.

Together this group takes audiences to a world where physical limitations don’t exist. This is the mission of JazzArtSigns, an ensemble created to bring disabled and mainstream communities together to enjoy music.

Boston-based Thorson, an associate professor at Berklee College of Music, and the disability advocacy group VSA Arts of Massachusetts worked together to make jazz performances more accessible. At first, blending different mediums was daunting and frustrating. “[VSA Arts] kept asking me to perform and then would have ASL interpretation,” Thorson says from her home near Boston. “I kept saying yes, but the music I was choosing wasn’t necessarily working for a deaf audience.”

Thorson has worked with VSA Arts since 1985 as a board member and as an artist-in-residence and performer in recent years. A Texas native, she settled in Rhode Island when she was 16 and later became disabled after a car accident in 1979.

Thorson was active in theater at the time, but music soon became her focus. A summer jazz workshop in western Massachusetts led by singer Sheila Jordan and instrumentalist Yusef Lateef cemented her career choice. But reaching an audience that was as inclusive as possible proved to be a challenge. “I wanted to do stuff without words, scat singing and songs that were too metaphoric and hard to be translated into ASL,” says Thorson.

In developing JazzArtSigns, the singer and VSA Arts queried the handicapped community and experimented with different formats and entertainers. Initially the results were mixed. Thorson found the key element a year later when she read an article about Ostrovsky. The singer and educator discovered that the upstate New York-based painter and sculptor had a long history of performing with mostly avant-garde jazz musicians. On a whim, Thorson called Ostrovsky, who agreed to participate in what would become JazzArtSigns.

Additionally, Thorson enlisted the talents of kindred players: saxophonist Cercie Miller, pianist Tim Ray, bassist David Clark and drummer George Schuller. In 1999, without a rehearsal, she brought the players, ASL interpreters, close-captioners and Ostrovsky together for a concert-and amazingly, everything worked. “It was an audience of about 150 people at the Cambridge Multicultural Art Center, and just miraculous. Deaf, blind, hearing impaired and people without disabilities all enjoyed it,” Thorson says.

In March, JazzArtSigns performed at the Wheelock Family Theatre in Boston. The group’s last performance before that was at a Portsmouth, N.H., theater in 2003. The long gaps between JazzArtSigns concerts are mostly due to the large amount of funding required for the performances. Support has come from organizations including the National Endowment for the Arts, the Christopher Reeve Foundation and Berklee College of Music’s Faculty Fellowship Program. In the near future JazzArtSigns hopes to do a limited tour and record a CD and DVD.

For more information about the ensemble and music programs for the handicapped go to lisathorson.com, vsamass.org and wheelock.edu/wft.

When Azar Lawrence grabs you for a handshake, your fingers quickly know they’ve met their match. He may be past the mid-century mark, but the … END_OF_DOCUMENT_TOKEN_TO_BE_REPLACED

Having an icon such as Nina Simone as a mother, a music career should almost be a no-brainer. Then again, some musicians try to dissuade … END_OF_DOCUMENT_TOKEN_TO_BE_REPLACED

He recorded with Jelly Roll Morton, opened the Apollo Theater in 1934 (with Benny Carter) and played with Duke Ellington at the Cotton Club. On … END_OF_DOCUMENT_TOKEN_TO_BE_REPLACED

Shouts of “Maceo!” by James Brown, both onstage and on albums, preceded solos by saxophonist Maceo Parker from the 1960s to the 1980s, giving him … END_OF_DOCUMENT_TOKEN_TO_BE_REPLACED