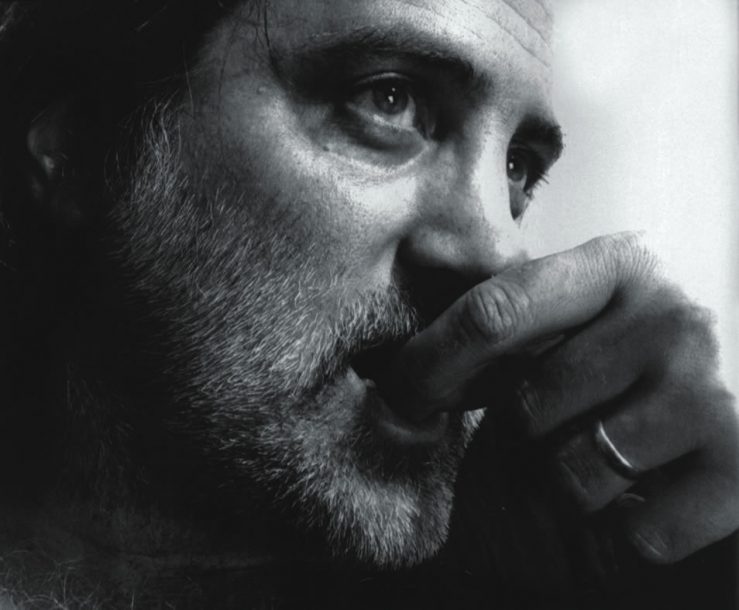 Bronx-raised Kip Hanrahan talks and talks and talks to me in a rapid-fire cadence as if he is trying to make up for lost time. This 51-year-old composer-bandleader-producer is excited because his American Clave label releases are now available in this country for the first time in over a decade, via a deal with Synergy Distribution.

This graying, messy-haired artist keeps yakking away to me in Starbucks for another reason. Ever since his wife got a professorial slot at George Mason University 11 years ago, he and his family have been living in the outer D.C. suburb of Reston, Va. Far from his New York City musical colleagues except when he heads up there to record, Hanrahan’s a stay-at-home musician-dad thrilled that he can open up about his two-plus decades’ worth of Latin, jazz, rock, blues and poetry projects with the likes of David Murray, vocalist Jack Bruce, Andy Gonzalez, Alan Toussaint, Milton Cardona, Charles Neville, writer Ishmael Reed and many more. Alternately humble, arrogant, pompous and down-to-earth, Hanrahan is always open and honest: “Yes,” he says, I can quote him as referring to Jack Bruce’s Cream bandmates Eric Clapton and Ginger Baker as “bozos.”

A onetime teenage percussionist with Eddie Palmieri, Hanrahan has never stopped recording or performing. “By the early ’90s I was making enough money from selling and licensing records in Europe, and later Japan, that it did not make sense for me to worry and spend time putting them out [in the U.S.],” he says. But Hanrahan also went through legal hassles with major-label subsidiary Pangaea and with others, which forced him to take a job driving a truck to pay his bills.

“I learned that no matter how preferably you can write a contract, including clauses that the big company gets punished for not honoring them, it means nothing,” Hanrahan says. “If they don’t want to pay you, you have to sue them and be in court for three years. So I gave up on them. Then, for a while Rounder printed [the CDs] but did not distribute them. They charged me back for them, and they sat in a warehouse for the last 10 years.”

This has meant that such Hanrahan productions as his Arabian Nights homage, A Thousand Nights and a Night, and the dual trap-drummer avant-Latinisms of Robby and Negro at the Third World War have been barely recognized here. In addition, Hanrahan has not performed in America since 1999. The lack of visibility “bothers me,” he says, “but my disappearance from music history in America did not shake me. I have enough internal, unworded faith in the importance of my music.”

Hanrahan spends his time in Reston reading three newspapers a day, listening to Amy Goodman’s left-wing news analysis on the radio and studying music theory. “I’m an expatriate here as much as I would be if I was in Algiers,” he says. “I cannot compose here. I have to go to New York. The first two summers here, crickets kept me up all night.”

Thus Hanrahan makes frequent trips to the Big Apple, where he spends a lot of time in the studio. While creating A Thousand Nights he recorded 12 hours’ worth of music. The pianist on that album, Don Pullen, was dying, and Hanrahan notes that he wants to turn those sessions into a 12-disc set. Other newish releases on American Clave include the clave beat, brass cacophony and spoken-word stylings of Conjure’s Big Mouth and the Piri Thomas soundtrack Every Child Is Born a Poet. More recently, Hanrahan got together with bassist Steve Swallow, three trap drummers, two percussionists and others and recorded nine-plus hours of music in a week. Hanrahan’s label will be releasing some material from those sessions on two discs in early 2006. “We reinvent [ourselves] every record,” Hanrahan says. “It’s different every time.”

He recorded with Jelly Roll Morton, opened the Apollo Theater in 1934 (with Benny Carter) and played with Duke Ellington at the Cotton Club. On … END_OF_DOCUMENT_TOKEN_TO_BE_REPLACED

Shouts of “Maceo!” by James Brown, both onstage and on albums, preceded solos by saxophonist Maceo Parker from the 1960s to the 1980s, giving him … END_OF_DOCUMENT_TOKEN_TO_BE_REPLACED

Having an icon such as Nina Simone as a mother, a music career should almost be a no-brainer. Then again, some musicians try to dissuade … END_OF_DOCUMENT_TOKEN_TO_BE_REPLACED

When Azar Lawrence grabs you for a handshake, your fingers quickly know they’ve met their match. He may be past the mid-century mark, but the … END_OF_DOCUMENT_TOKEN_TO_BE_REPLACED