Skip to content
Become a member and get exclusive access to articles, live sessions and more!
Start Your Free Trial
Home > Blog > Frank Zappa, ZAPPAtite > “ZAPPAtite” to Be Released on Sept. 23 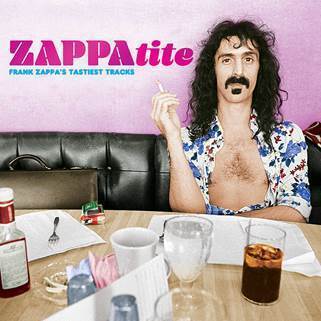 "ZAPPAtite" is scheduled to be released on Sept. 23

On Sept. 23, Zappa Records/UMe will release an 18-song, three-part album titled ZAPPAtite – Frank Zappa’s Tastiest Tracks, featuring some of the artist-composer’s most celebrated compositions-“from his early psychedelic rock beginning to his avant-garde experimentation, jazz-rock explorations, symphonic suites and satirical send-ups,” according to a press release.

The 18 compositions, which are all food-themed and separated into courses-Appetizers, Entrees and Desserts-were selected by Zappa’s son Ahmet Zappa and Joe Travers, an encyclopedic Zappa archivist appropriately nicknamed “Vaultmeister.” “This isn’t a greatest hits album as Frank didn’t really have ‘hits,’ per se, nor is it a ‘best of’ since that would be an impossibility to fit so much awesome onto one disc,” said Ahmet Zappa in the release. “It’s a veritable smorgasbord of musicality for the curious and a buffet of favorites for the fans, ZAPPAtite collects a cross section of my favorite songs composed by my dad, that lean more towards the rock side of his expansive repertoire. I hope you’re hungry because this meal for your ears rocks!”

Available on CD and digitally, with vinyl to come, ZAPPAtite kick offs with “I’m the Slime” and “Dirty Love” from Zappa’s 1973 album Over-Nite Sensation before moving on to “Dancin’ Fool” and “Bobby Brown Goes Down” off Sheik Yerbouti. Entrees includes “Peaches En Regalia,” the artist’s beloved instrumental from his 1969 record Hot Rats, which was just reissued on 180-gram vinyl on Aug. 26. And Desserts concludes with live performances from the 1978 album Zappa In New York, as well as the “frenetic Synclavier-fueled ‘G-Spot Tornado'” from Zappa’s 1986 album Jazz From Hell.

The full track listing for ZAPPAtite – Frank Zappa’s Tastiest Tracks is as follows: