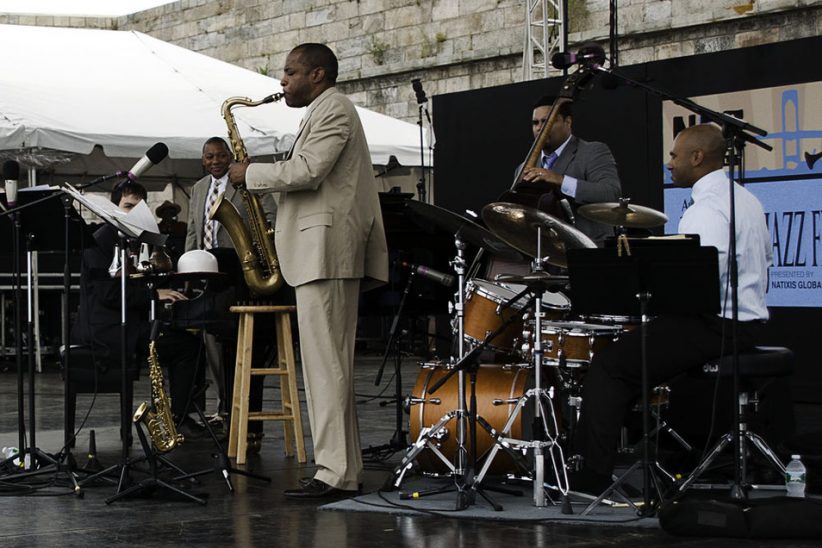 The Wynton Marsalis Quintet performing at the 2011 Newport Jazz Festival

The world premiere of Wynton Marsalis’ newly revised, complete “Blues Symphony” for 100-piece symphony orchestra will take place Feb. 4 at 8.m. at the Music Center at Strathmore, in Rockville, Md. The performance, presented by Washington Performing Arts, will also feature the Wynton Marsalis Quintet in a solo set. The performance is the culmination of a semester-long residency with the Shenandoah Conservatory Symphony Orchestra as part of Washington Performing Arts’ “The Art of the Orchestra Series.”

Marsalis’ “Blues Symphony” was unveiled in part by the Atlanta Symphony Orchestra in 2010. But, according to a press release, “the newly revised and complete version … had yet to enjoy its world premiere-owing in part to the essential need for significant rehearsal time … Washington Performing Arts initiated a semester-long residency program with Shenandoah Conservatory and its Symphony Orchestra as an element of the orchestra’s curriculum. Over the course of several months of study and rehearsals in Fall 2014, Marsalis and the Shenandoah Orchestra, under the direction of Jan Wagner, held multiple working sessions to hear how the piece was coming together, fine-tune the music, and fully explore the intricate themes and musical styles.

Don Vappie, the New Orleans-based four-string banjo virtuoso, has been awarded the prestigious Steve Martin Banjo Prize. Vappie, who has performed with the Preservation Hall … END_OF_DOCUMENT_TOKEN_TO_BE_REPLACED

Jazz at Lincoln Center’s managing and artistic director, trumpeter Wynton Marsalis, turns 60 this year. This, per JALC, is the long-awaited catalyst for the New … END_OF_DOCUMENT_TOKEN_TO_BE_REPLACED