The Sarah Vaughan International Jazz Vocal Competition, now in its seventh year, is accepting applications for the 2018 contest. Also known as the SASSY Awards, the competition’s finals will take place Nov. 18 at the New Jersey Performing Arts Center’s (NJPAC) Victoria Theater in Newark, as part of the TD James Moody Jazz Festival.

Contestants must be age 16 or older and may not be presently signed to a major record label. Applicants from around the world are encouraged to apply. In addition, for the second time, the 2018 competition is open to both male and female vocalists.

Vocalists may enter the competition by submitting recordings of three performances, one of which must be a Sarah Vaughan cover, at sarahvaughancompetition.com by no later than Sept. 5 at 5 p.m. On Oct. 12 the competition will announce five finalists, who will perform on Nov. 18 in front of a panel of judges that will include bassist Christian McBride and other celebrity judges to be named at a later date.

The winner will receive the SASSY Award: a $5,000 cash prize and a record deal with Concord Music Group. Last year’s winner was Quiana Lynell, a native of Baton Rouge, La., currently based in New Orleans. Past winners include Cyrille Aimée (the inaugural winner), Jazzmeia Horn, Ashleigh Smith, Arianna Neikrug and Deelee Dubé.

The Sarah Vaughan International Jazz Vocal Competition pays tribute to its namesake, a Newark native who began her career at 18, in 1942, by winning a singing contest at the Apollo Theater in New York and became one of the most important and renowned vocalists in jazz history. The competition bills itself as “the only international jazz competition of its kind, providing a platform for one outstanding jazz singer to launch a career within the music business.”

For more information on the competition, visit sarahvaughancompetition.com. To purchase tickets for the finalists’ performances on Nov. 18, visit njpac.org.

Read a review, by Allen Morrison, of the 2016 competition.

Read a recap of the 2017 competition. 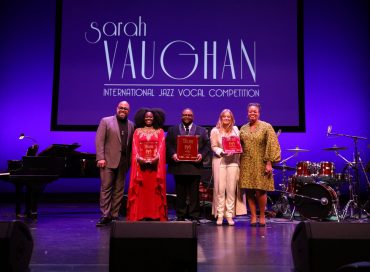 G. Thomas Allen from Chicago was announced as the winner of the 10th Annual Sarah Vaughan International Jazz Vocal Competition on Sunday, Nov. 14 at … END_OF_DOCUMENT_TOKEN_TO_BE_REPLACED