Skip to content
Become a member and get exclusive access to articles, live sessions and more!
Start Your Free Trial
Home > Blog > Blog, JazzTimes > This Week in Jazz Blogs: July 1-7, 2011 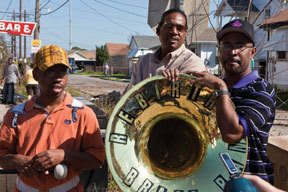 A round-up of the most interesting jazz-related blogs this week, in alphabetical order, because that’s the egalitarian thing to do. The season finale of HBO’s Treme sparked discussion about the show among bloggers this week.

Nate Chinen on solo piano and David Weiss & Point of Departure’s Snuck Out.

David Hajdu on the “timeless chemistry” of Jon Hendricks and Annie Ross.

Don Heckman posts his quotation of the week along with his concert recommendations of the week.

Patrick Jarenwattananon and a Blog Supreme on Treme, the Heath Brothers and Julian Lage.

Howard Mandel on Treme and the American Composers Orchestra.

Steve Provizer responds to criticism of Treme and posts clips of “up from the basement” lines.

Michael Steinman on Joel Press at the Fat Cat and Lee Riley.

Let us know with a Comment below if we’ve missed any notable jazz blogs this week.

Fresh off the celebration of our 50th anniversary, we’d like to announce a new initiative for our sixth decade in business: the launch of the … END_OF_DOCUMENT_TOKEN_TO_BE_REPLACED

Listen in on a conversation with vocalist Freda Payne on Sunday, Sept. 1 at the Mack Avenue Music Group Jazz Talk Tent during the Detroit … END_OF_DOCUMENT_TOKEN_TO_BE_REPLACED

Passes for the 2020 Jazz Congress, a conference that brings together members of the global jazz community to network and help expand the music’s audience, … END_OF_DOCUMENT_TOKEN_TO_BE_REPLACED