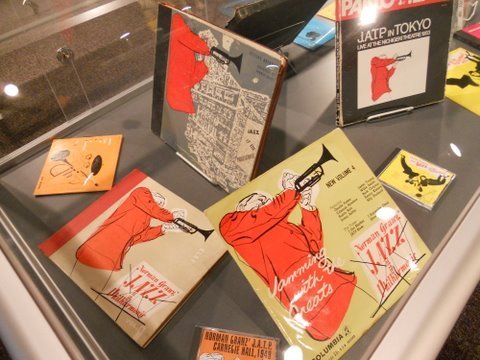 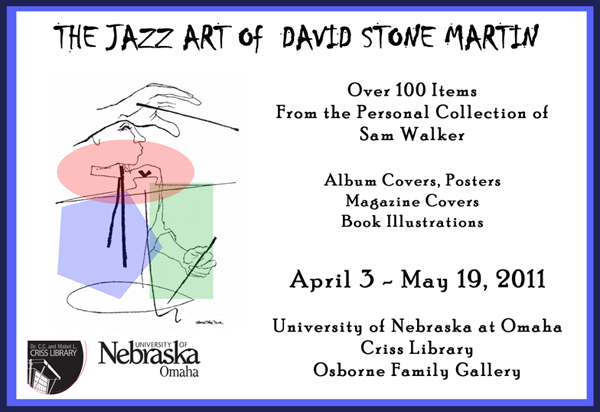 “The DSM line” is on display in a big way at the University of Nebraska Omaha (UNO) in honor of jazz appreciation month. A fine, fluid curving stroke that outlines a sloping curlicue-topped, fret board or a the sleek frame of horn player at rest, it is the visual signature of David Stone Martin (DSM), the celebrated illustrator of over 400 jazz album covers between 1940 and the early 1980’s.

The “Jazz Art of David Stone Martin,” a free exhibit showing through May 19th at the school’s Osborne Family Gallery of the Criss Library, features over 100 works by the late artist, whose work is also displayed at the MoMa, the Met, the Art Institute of Chicago (Martin’s alma mater) and the Smithsonian. This is only the second show in history dedicated solely to Martin’s work (the first was last year at Jazz at Lincoln Center). The exhibit features record albums, Downbeat and Time magazine covers, theatrical and political posters and 9 illustrated books, all from the formidable collection of UNO professor emeritus of criminal justice, Samuel Walker.

“It’s just a beautiful style,” Walker says of Martin’s work, “It’s very unique, very distinctive and just fascinating. There are a lot of motifs that reappear-I love those cascading keyboards that kind of sweep across the album cover, and there are variations of that in several album covers. Just the way he shows instruments and musicians holding their instruments. It’s just a beautiful style. You know he’s famous in the jazz world for this and for good reason.”

Walker has plenty with which to compare it; His record collection totals over 7,000. While he loves graphic art-he also collects political posters from the world wars, the civil rights movement and presidential campaigns-it was Walker’s love of jazz music that first led him to Martin. The art for Walker is a beautiful supplement, although it does not influence his hearing of the music itself.

“In his great period they were all done for albums related to Norman Granz, you know Verve and before that Clef and so on, so you’ve really got some of the greatest musicians of all time. You’ve got Art Tatum, I’ve got several there. You’ve got Oscar Peterson, Count Basie, Stan Getz-so the music stands on its own, even if you put it in a plain brown wrapper. But the art really just adds something extra.”

Walker laments the disappearance of this “extra” in the digital age. He remembers a day when the release of a new album was “an event,” and feels that a hefty, masterfully illustrated cover was a significant part of that experience. “The whole idea of the album cover is a lost world,” he says, “It’s gone.” For Walker and many others, David Stone Martin was that world’s greatest achiever.