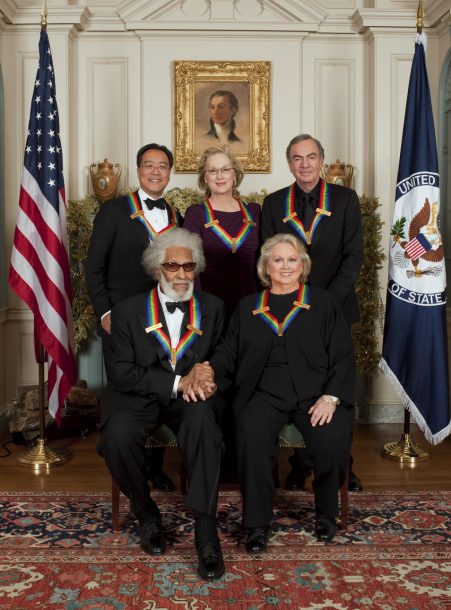 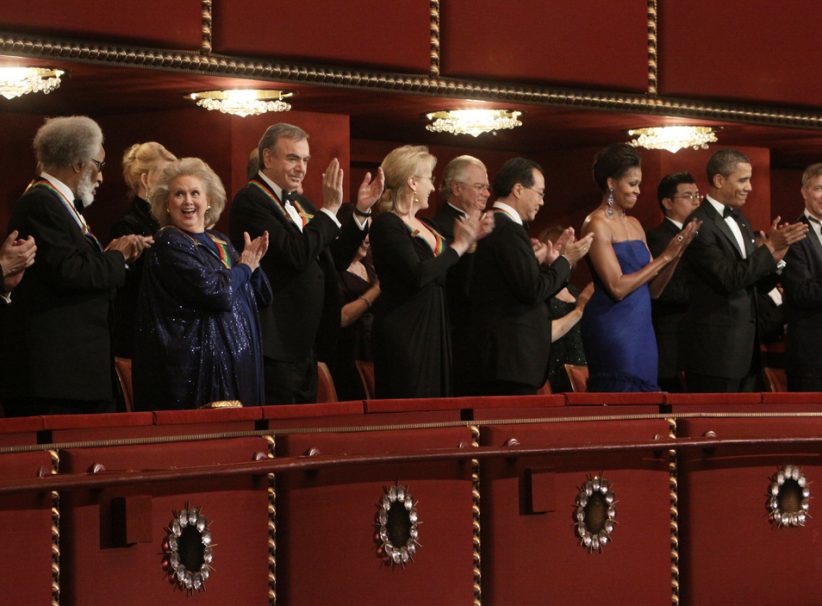 On Sunday night, the Kennedy Center taped its annual awards show in which it honors five Americans whose “collective artistry has contributed significantly to the cultural life of our nation and the world,” according to Kennedy Center Chairman David Rubinstein. Recipients of the 2011 Kennedy Center Honors were actress Meryl Streep, singer Barbara Cook, singer-songwriter Neil Diamond, cellist Yo-Yo Ma and saxophonist Sonny Rollins. An edited version of the gala will be broadcast in a two-hour program on CBS on Tuesday, December 27.

Rollins is the eighth jazz musician-after Ella Fitzgerald (1979), Count Basie (1981), Benny Goodman (1982), Lena Horne (1984), Dizzy Gillespie (1990), Lionel Hampton (1992) and Dave Brubeck (2009)-to be recognized with the Kennedy Center Honors since its creation in 1978, not counting numerous actors like Jack Lemmon, Clint Eastwood and Fred Astaire who like to play or sing jazz too.

Security at the noted performing arts center on this night was tight, because of the presence of the President and the First Lady. Folks who lined the red carpet in the Kennedy Center in order to catch a glimpse of the many stars of film, TV, stage, music and politics could also take in the sight of the same celebrities navigating through an airport-style metal detector, while dressed in formal wear. And there was plenty of star power in the house, though it seemed that the most famous or at least recognizable faces came for Streep, including Robert DeNiro, Kevin Kline, Stanley Tucci, Mike Nichols, Diane Sawyer, Sam Waterston, Sarah Jessica Parker, Matthew Broderick and Anne Hathaway. Famous pols in attendance included Newt Gingrich, Nancy Pelosi, John Kerry and Barbara Boxer.

For each honoree, a celebrity speaker paid his/her respects in a five-to-10-minute speech and then introduced a short video profile (narrated by the same speaker), followed by a stage presentation of some sort. Most of the salutes were filled with humor, from Tracy Ullman gibing Streep about being great at everything except being saluted…to Stephen Colbert describing Yo-Yo Ma’s gifts as being so powerful that they created a threat to our security.

Rollins was introduced by Bill Cosby, who did a long routine about traveling to different cities and hearing Rollins’ music everywhere. At times he seemed to imitate the saxophonist’s scratchy, high voice, though that may have been merely a coincidence, with the two not far off in age. Ending on a particularly high note, Cosby said that Rollins is “a person to rejoice.”

An all-star band led by Christian McBride, proceeded to roll through four songs associated with Rollins, performed in various configurations, with an obvious emphasis on tenor saxophonists, including Joe Lovano, Ravi Coltrane, Jimmy Heath and Benny Golson. Lovano and Coltrane, evoking the spirit of Tenor Madness, opened the suite with a fiery sax battle on “Just In Time,” backed by McBride and drummer Billy Drummond. Rollins’ old friend, guitarist Jim Hall, was also a pivotal part of the musical tribute, especially during a poignant version of “In a Sentimental Mood,” along with Herbie Hancock on piano, Roy Hargrove on trumpet, McBride and Drummond. During “Sonnymoon for Two,” Benny Golson and Jimmy Heath, two of Rollins’ associates from the ’40s and ’50s jazz scene, got in the act. The finale of the four-song suite was a spirited rendition of Rollins’ “St. Thomas” that featured the entire ensemble of 11 musicians, including drummer Jack DeJohnette. McBride was the musical director for the segment and said getting everybody on the same page musically was remarkably easy because of both the quality of the players and their keen appreciation of Rollins.

Earlier in the evening, speaking with JT from the Kennedy Center’s red carpet, DeJohnette said that his first exposure to Rollins was on the Clifford Brown/Max Roach albums. “When I was starting out on drums, I used to practice to those records,” he said. “And when I first came to New York, I met Sonny at the Village Vanguard. He’s always been an original improviser with an amazing ability to transform a song or melody and take you a lot of places. Not only am I a big fan of Sonny and his music, but he’s a good friend too.” DeJohnette has a song on his upcoming CD Sound Travels paying tribute to Rollins, “Sonny Light,” which has the calypso feel that the saxophonist has so favored over the years.

Earlier in the day the five honorees went to a reception at the White House where they were saluted by President Obama and the First Lady [Obama’s complete remarks about Rollins are below]. “When Sonny Rollins was growing up, he and his friends would sneak into jazz clubs by drawing mustaches on themselves with an eyebrow pencil to try to look older,” said Obama. “Did that work, Sonny? We don’t know if it fooled anybody, but they did get into the clubs.”

Later, during the video that was played at the beginning of the festivities at the Kennedy Center, Obama talked about how Rollins’ music was a staple in his wife’s household when she was growing up in Chicago. And in another reception for the honorees, former President and sometime saxophonist Bill Clinton gave a stirring speech about the breadth of Rollins’ creative muse and gifts.

For his part, Rollins seemed to be glowing in all the admiration, telling interviewer after interviewer how much the honor meant to him and to the music. “I think it’s a wonderful thing for our country,” said Rollins. “Other jazz musicians have won this award, but it’s never enough, because jazz is so important to America and a lot of people don’t realize that, especially in these times the way the world is going now. America needs to show its beauty and jazz is [part of that]. And people love jazz all over.” He even confirmed to one reporter that when he was 7 years old he had foreseen this honor, or at least his own rise to international recognition. “I don’t know why,” he said. “I just had a feeling. I knew that I would be prominent. I didn’t know what I would be, but I know I would be prominent in the field of music.”

Sesame Street character Elmo, paying tribute to cellist Yo-Yo Ma, may have been speaking about Rollins as well when he (Elmo is a he, right?) said that Ma taught him that, “Music is like a playground; there are so many ways to have fun.” This was a night when the serious was fun and the fun was serious.

When Sonny Rollins was growing up, he and his friends would sneak into jazz clubs by drawing mustaches on themselves with an eyebrow pencil to try to look older. Did that work, Sonny? We don’t know if it fooled anybody, but they did get into the clubs.

Harlem in the 1930s was a hotbed of jazz, and for a young musician with a big horn and bigger dreams, it was heaven. Duke Ellington and Coleman Hawkins lived around the corner. Sonny learned melody and harmony from Thelonious Monk, and Miles Davis was a regular playing partner.

It wasn’t long before Sonny earned the nickname “the Saxophone Colossus,” and became known as one of the greatest improvisers in the history of jazz. Today, he often plays hour-long solos without any repetition, leaving audiences speechless. People sometimes wonder how he can play for so long, but in Sonny’s words, “It just means there’s something out there, and I know I have to find it.”

Sonny also loves to roam the crowd during a performance. One story goes that he was halfway through a solo one night when he jumped off the stage and disappeared. Just when the band was about to go looking for him, the solo started back up. Sonny had broken his foot and was lying on the floor, but he finished the set with so much energy and passion, the audience didn’t notice.

To hear Sonny tell it, he’s just keeping things pure. “The worst thing in the world to me is to play by rote,” he says. “You have to play from the inside; that’s real jazz.”

The John F. Kennedy Center for the Performing Arts will mark its first expansion on September 7-22 with the REACH Opening Festival, featuring more than … END_OF_DOCUMENT_TOKEN_TO_BE_REPLACED

The National Endowment for the Arts will honor this year’s Jazz Masters—Bob Dorough, Abdullah Ibrahim, Maria Schneider, and Stanley Crouch—with a series of Washington D.C.-based … END_OF_DOCUMENT_TOKEN_TO_BE_REPLACED