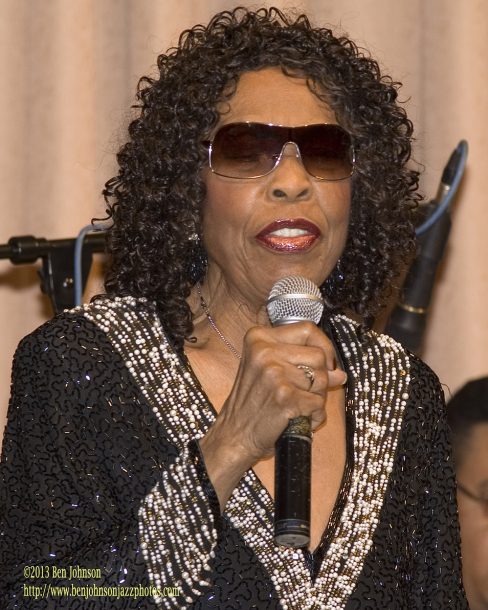 Gloria Lynne in Philadelphia in 2007

Gloria Lynne, a vocalist whose career spanned six decades, and who was best known for her signature song “I Wish You Love,” died Oct. 15 in Newark, N.J. The cause of death was a heart attack. Lynne was 83.

Born Gloria Alleyne in New York City in 1929 (some sources say 1931), Lynne was raised with gospel music and sang in her Harlem church as a child. At 15 she won first prize at the Apollo Theater’s amateur night and soon she was singing in local groups such as the Enchanters and the Dell-Tones. She went solo in 1958 and was signed to Everest Records, with which she recorded more than 10 albums over the next five years. She also placed four singles on the Billboard R&B chart while on Everest, including “Impossible” in 1961 and “I Wish You Love” in 1964. Her highest charting single was her 1965 cover of Herbie Hancock’s “Watermelon Man” on the Fontana label, which reached number 8 on the magazine’s R&B chart. Lynne added her own lyrics to Hancock’s melody.

Lynne’s vocal style, particularly in performance, encompassed R&B, pop, gospel and various strains of jazz, which she specialized in as her hitmaking days ended. Lynne appeared on several TV specials and worked with such musicians as Quincy Jones and Philly Joe Jones.

Lynne was largely out of the public eye throughout most of the ’70s and ’80s but she made a comeback in the 1990s. During that decade she received the International Women of Jazz Award and a Pioneer Award from the Rhythm and Blues Foundation. She last recorded for HighNote Records, releasing the album From My Heart to Yours in 2007. She was still performing until shortly before her death.

Gregory Porter, the soulful crooner who helped make jazz a topic of conversation for mainstream music listeners, has a new podcast. Gregory Porter – The … END_OF_DOCUMENT_TOKEN_TO_BE_REPLACED

H&H Classics, the specialist auction house dedicated to the sale of collectors’ vehicles, will launch its first online live auction on Feb. 2, 2019—and the … END_OF_DOCUMENT_TOKEN_TO_BE_REPLACED