Skip to content
Become a member and get exclusive access to articles, live sessions and more!
Start Your Free Trial
Home > Blog > Giant Step Arts, Jeremy Pelt, Walk with the Wind, Wayne Escoffery > Second Season of Walk with the Wind Concerts to Begin in Central Park

Walk with the Wind, a free concert series in New York’s Central Park that began last fall under the auspices of the nonprofit Giant Step Arts, will begin a new season of performances in the park on April 4. The new edition finds Giant Step Arts partnering with Jazz Generation’s KEYED UP! anti-poverty program.

The kickoff concert for the 2021 edition will feature the Wayne Escoffery/Jeremy Pelt Quartet as well as a quartet featuring alto saxophonist Sarah Hanahan, trumpeter Giveton Gelin, bassist Phil Norris, and drummer Robert Lotreck. It will take place beginning at 11 a.m. at the south end of the Mall (at approximately 66th Street in the middle of the park).

Other announced performances include the James Brandon Lewis Trio with Rashaan Carter and Chad Taylor on April 10, and the Melissa Aldana Trio with Pablo Menares and Kush Abadey on April 11. Hanahan will open both concerts, which begin at 11 a.m. at pop-up locations in the park.

Curated by photographer Jimmy Katz and Nasheet Waits, Walk with the Wind not only supports artists who have struggled to find work during the COVID-19 pandemic but also honors the life and legacy of the late Congressman John Lewis (D-GA). 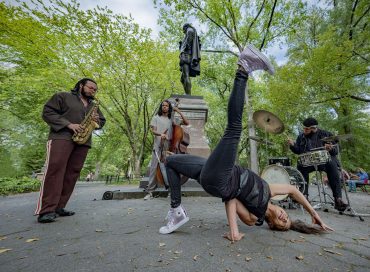