It was in the 1990s that Louisiana state officials decided to cut funding for music education in New Orleans schools. Alarmed at the decision, Jackie Harris—founder of the Louis “Satchmo” Armstrong Summer Jazz Camp—worried for the fate of jazz in its hometown.

“We were really concerned and felt it would affect New Orleans’s ability to continue to perpetuate the art form that was created here,” Harris says. “We certainly couldn’t create a school, but we decided to do a jazz camp.”

The camp has grown, in size and scope, considerably in the past quarter-century, says Harris. There were 35 students and six teachers at the first jazz camp. This year, nearly 100 campers will take part in the three-week program.

Looking back on 25 years, Harris notes that many notable artists have attended the camp, such as Trombone Shorty, trumpeter/composer/producer Christian Scott a Tunde Adjuah, and The Late Show with Stephen Colbert‘s bandleader and musical director Jon Batiste, among others.

She’s inviting all of the jazz camp’s alumni, musicians and non-musicians, to attend a culminating concert set for July 12 with the campers, including one from South Africa attending as part of a new exchange program.

That exchange was cemented last year in a partnership between the New Orleans Arts and Cultural Host Committee (the nonprofit that presents the camp) and the Standard Bank Joy of Jazz Festival in Johannesburg. The student—Dalisu Ndlazi—will stay with Dr. Gabou Mendy, a Nigerian-born physician, and his wife Greer, a dancer who heads her own nonprofit dedicated to preserving dance and New Orleans culture.

Harris recalls another cultural exchange that reminds her of the kinds of lessons she hoped the jazz camp would teach. One year the camp welcomed an instructor from Cuba, and the following year Harris traveled to the island with six students and two instructors for a visit.

She said during the trip the campers witnessed that it’s possible to learn and perform even if the circumstances are less than ideal.

“They saw that you don’t have to have all of the material and financial things in place or everything perfect. They saw that if you’re really serious about achieving something you can do it, whether that’s in music or something else,” Harris says. “We are teaching life skills and we’re using music as a vehicle to do that.”

To achieve that, the Louis “Satchmo” Armstrong Summer Jazz Camp has been updating its curriculum with some non-traditional courses. Three years ago, the camp launched a money management workshop geared toward working musicians. Harris notes that at after this year’s session, plans are in the works to create an entire finance and money management program.

“No matter what profession you’re in, you have to manage your money,” Harris says. “We want students to avoid any pitfalls.”

Unfortunately, the 25th-anniversary celebration will be taking place without longtime instructor and “Queen of Swing” Norma Miller, who passed away May 5 at the age of 99. A dancer, comedian, and big-band singer, Miller helped popularize the Lindy Hop in the 1930s and ’40s; she is now named a lifelong artist in residence.

Harris says Miller was glad to see swing make a comeback in her lifetime.

“Swing dance was almost gone and dead and there’s a resurgence now,” says Harris. “What she cherished more than anything was the fact she got a chance to see African-American students perform that music, dance to that music, and learn that music.”

Michael Murphy’s jazz-accented documentary Up from the Streets – New Orleans: The City of Music was supposed to be released the old-fashioned way this spring—in … END_OF_DOCUMENT_TOKEN_TO_BE_REPLACED

A tribute to Dr. John and appearances from the Legendary Count Basie Orchestra, Chick Corea, Buddy Guy, and many more are all slated for this … END_OF_DOCUMENT_TOKEN_TO_BE_REPLACED 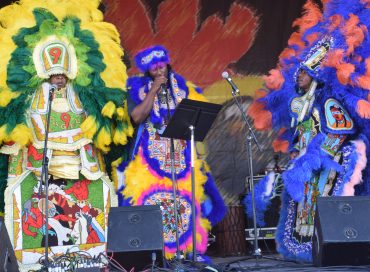 The Allison Miner Music Heritage Stage at the New Orleans Jazz & Heritage Festival is its only properly indoor venue, inside the grandstand of the … END_OF_DOCUMENT_TOKEN_TO_BE_REPLACED