In his 40-plus-year career, Cuban-born trumpeter Arturo Sandoval has collaborated with countless major musical figures. He has never, however, made a recording that placed those collaborations into the intimate setting of a duet. On May 18, Sandoval finally achieves that benchmark with Universal Music Latino’s release of Ultimate Duets. The album includes Sandoval’s performance with Al Jarreau of the latter’s hit “After All”—the late vocalist’s final recording.

Sandoval asked each of his collaborators to bring in a favorite song for the duo to reimagine together. The results included a number of surprising, intriguing choices. Wonder asked to record Barbra Streisand’s hit “People,” which he and Sandoval had previously performed at a Grammy tribute to Streisand; Lyngstad joined Sandoval for a new rendition of “Andante, Andante,” a deep cut from ABBA’s 1980 album Super Trouper. Singer-songwriter-producer Pharrell Williams responded to Sandoval’s invitation not by suggesting an old favorite, but by composing a new original tune, “Arturo Sandoval,” on which he and the trumpeter are joined by pop vocal sensation Ariana Grande.

Ultimate Duets is Sandoval’s first album in five years, and his first since he was awarded the Presidential Medal of Freedom by Barack Obama in 2013.

Read a review of Sandoval’s 2012 tribute album to his mentor and hero Dizzy Gillespie. 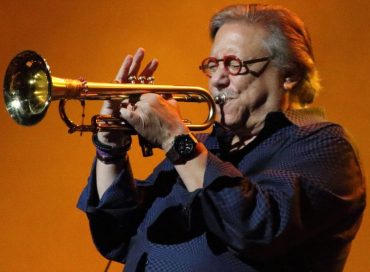 Let no one accuse Arturo Sandoval of not embracing the future. The legendary Cuban-American trumpeter’s forthcoming album, Rhythm & Soul, will be his first sold … END_OF_DOCUMENT_TOKEN_TO_BE_REPLACED

A tribute to Dr. John and appearances from the Legendary Count Basie Orchestra, Chick Corea, Buddy Guy, and many more are all slated for this … END_OF_DOCUMENT_TOKEN_TO_BE_REPLACED

On Dec. 12 at the August Wilson Cultural Center (AWCC) in Pittsburgh, Pa., trumpeter/composer/educator Sean Jones will present the world premiere of his composition A … END_OF_DOCUMENT_TOKEN_TO_BE_REPLACED