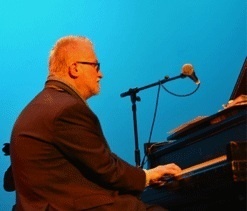 George Mesterhazy, a Hungarian-born, Cape May, N.J.-based pianist and composer, died in his home on April 11 of natural causes. He was 59.

Mesterhazy had recently released a new album with singer Paula West, Live at Jazz Standard, and the pair was scheduled to play the New York club together in May.

Nominated for a Grammy for his arranging work on 1997’s Loving You, with Shirley Horn (on which he also played), Mesterhazy came to the United States with his family when they fled Hungary following that country’s 1956 revolution. Settling first in upstate New York, Mesterhazy’s family later moved to Atlantic City, where he first played guitar and trumpet. After switching to piano and becoming a professional musician, he relocated to Los Angeles, but eventually became well known in the area of Cape May, N.J. He also played with Les Paul, Bernadette Peters and others.

Jazz at Lincoln Center and JazzTimes announced that NEA Jazz Master, pianist, composer, and educator Dr. Barry Harris is the recipient of the 2020 Bruce … END_OF_DOCUMENT_TOKEN_TO_BE_REPLACED

Jeff Goldblum has announced his second studio album, I Shouldn’t Be Telling You This, which includes guest turns from some other famous faces. It follows … END_OF_DOCUMENT_TOKEN_TO_BE_REPLACED