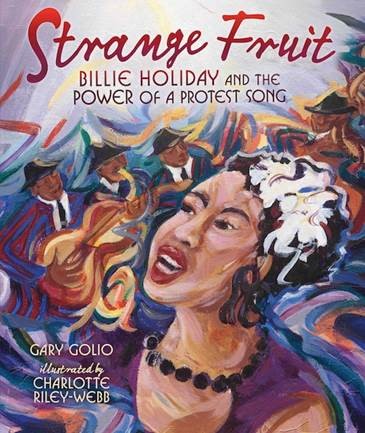 "Strange Fruit: Billie Holiday and the Power of a Protest Song"

Gary Golio’s newest book, Strange Fruit: Billie Holiday and the Power of a Protest Song (Millwood Press), tells a story of personal bravery, and how a song raising awareness of a horrifying subject—lynching—became an example of how music and art can affect social change.

Holiday was insulted and harassed for performing it in her shows, but “Strange Fruit” ultimately helped make her career and was a cornerstone of the U.S. civil-rights movement of the 1960s. Radio stations wouldn’t play it, yet “Strange Fruit” sold millions of copies and was named “Best Song of the Century” by Time magazine in 1999.

With illustrations by Charlotte Riley-Webb, Golio narrates a story important for both children and adults.

For more information, visit the official website of Gary Golio.