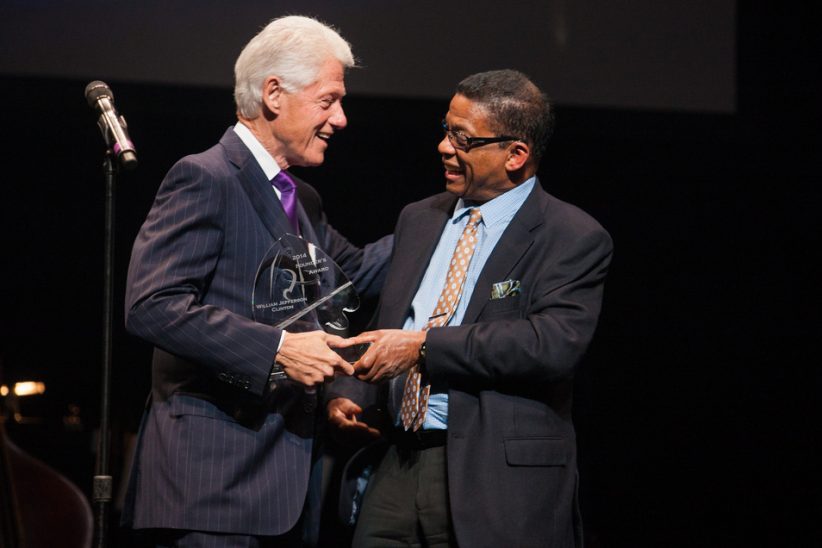 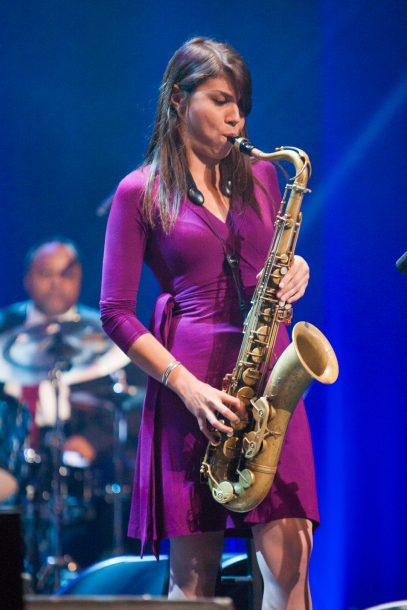 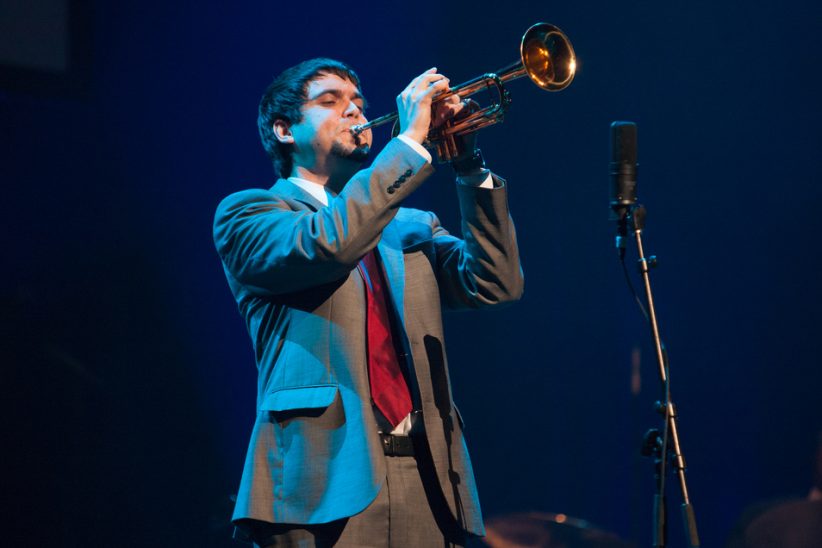 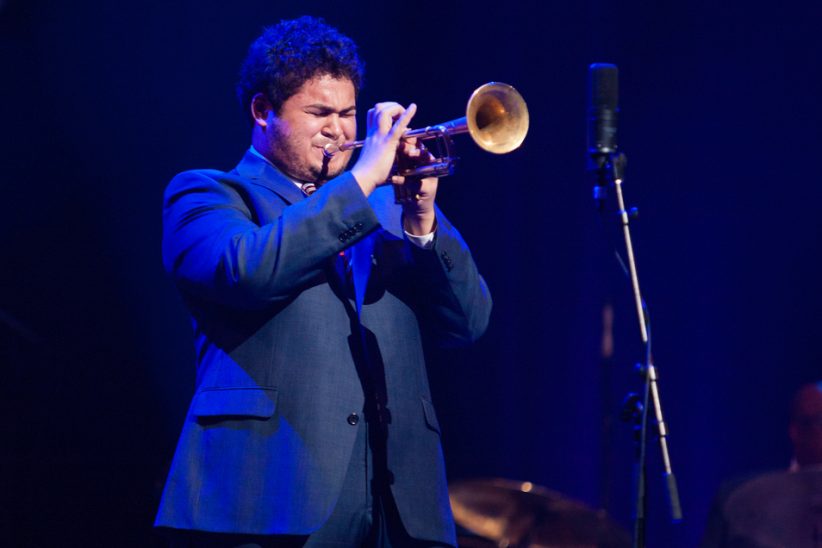 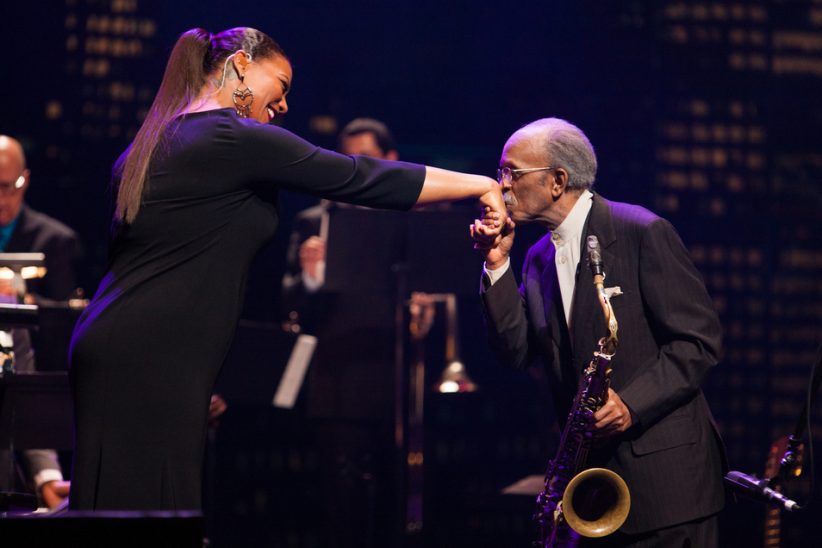 Queen Latifah and Jimmy Heath at the 2014 Monk Institute Competition Gala in L.A. 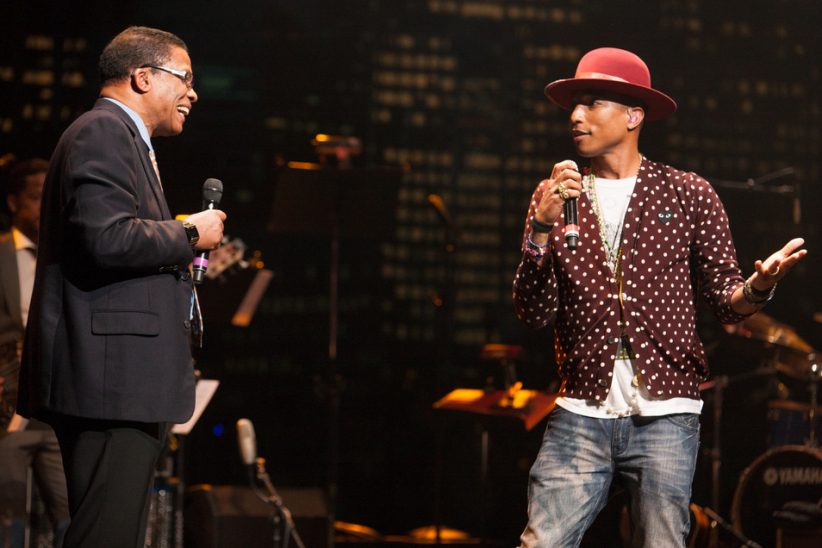 Herbie Hancock and Pharrell Williams at the 2014 Monk Institute Competition Gala in L.A. 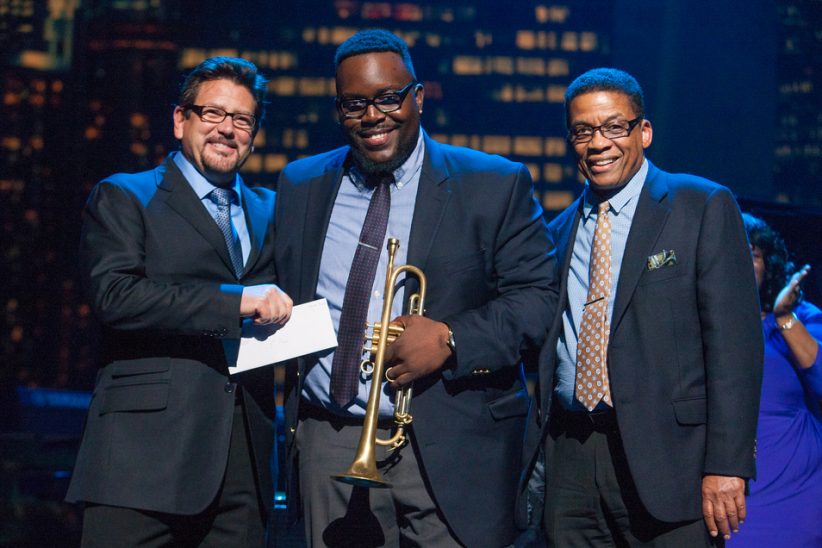 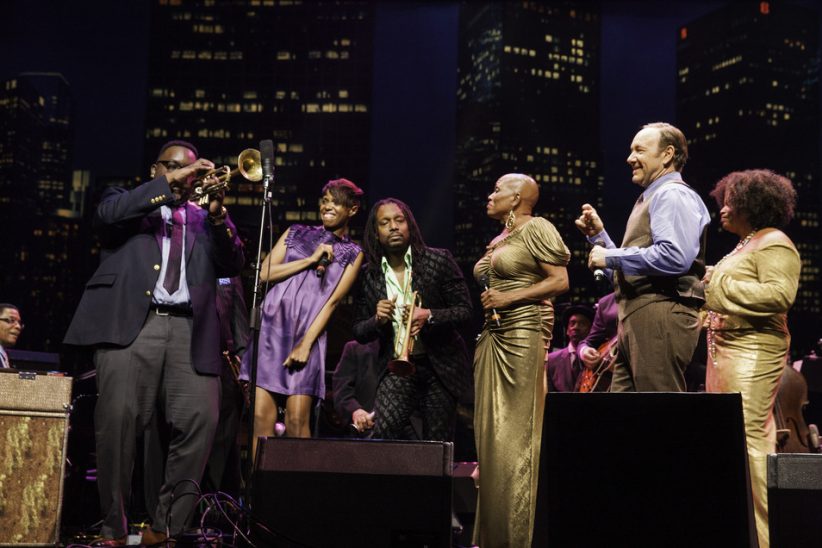 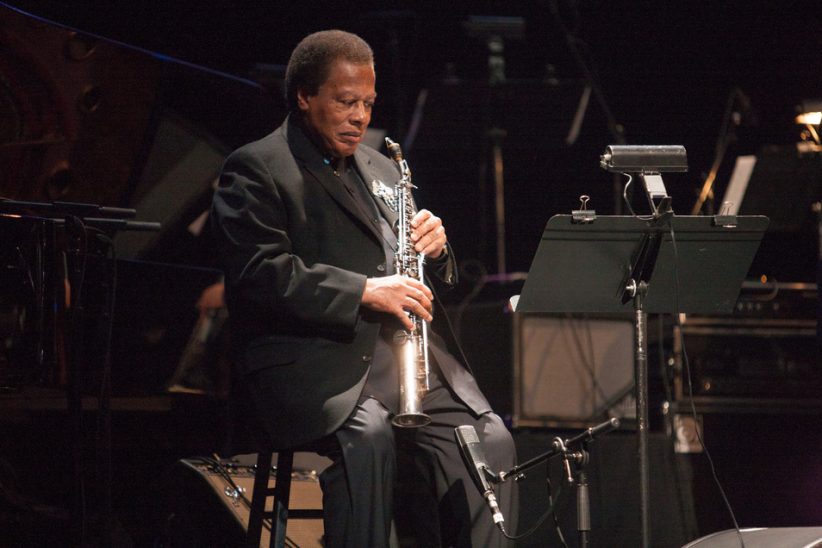 Wayne Shorter at the 2014 Monk Institute Competition Gala in L.A. 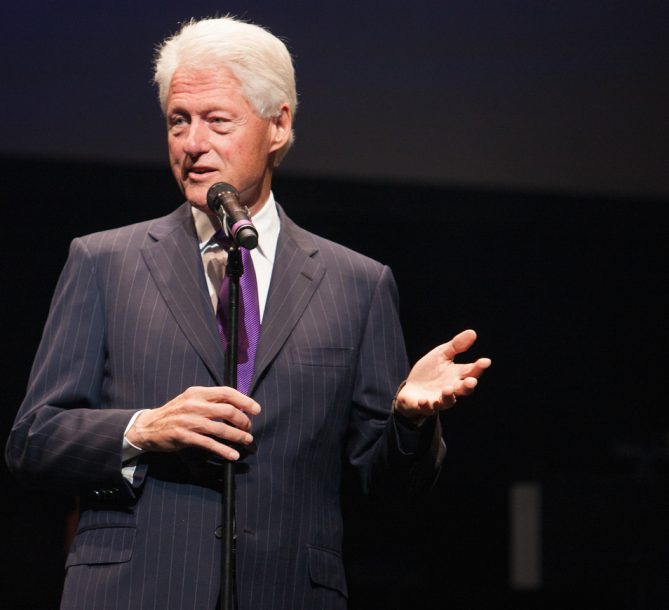 Jazz threw a party in Los Angeles on the weekend of Nov. 8-9. The occasion: the 27th annual Thelonious Monk Institute International Jazz Competition, arguably the jazz year’s most prestigious. The guests of honor: thirteen of the most talented up-and-coming trumpeters on the planet. The party favors: prizes worth more than $100,000, including a guaranteed recording contract with Concord Music Group. In the end, top prize went to 27-year-old Chicagoan Marquis Hill.

The three finalists ultimately selected by the judges brought considerable gifts to the stage. Institute board of trustees chairman T.S. Monk introduced Adam O’Farrill as “a third-generation monster”; he is the son of pianist Arturo O’Farrill and grandson of composer/arranger Chico O’Farrill. A Mingus Scholarship student at the Manhattan School of Music, O’Farrill unfurled a supple melodic sense on Billy Strayhorn’s “U.M.M.G.” and put some New Orleans gravy on the Monk classic “Ask Me Now.” Monk Institute graduate Billy Buss, an instructor at the Boston School of Music Arts, worked the trumpet’s upper register with sparse intelligence on “The Night Has a Thousand Eyes” and cohered marvelously with the trio throughout his performance. Hill won the 2013 Carmine Caruso International Jazz Trumpet Solo Competition and currently serves on the faculty at the University of Illinois. Hill’s take on “When Sunny Gets Blue” displayed nimble-fingered virtuosity and masterful dynamics, earning him the most emphatic audience reaction of all the semifinalists.

The following night, the festivities moved to Hollywood’s Dolby Theatre for the competition finals and all-star gala concert. One of the evening’s centerpieces was the presentation of the Institute’s Maria Fisher Founder’s Award, given annually to a public figure whose efforts promote the spirit of jazz throughout the world. This year’s recipient, introduced by co-host Herbie Hancock as the “Commander-in-Chief of Swing,” was former President Bill Clinton, who praised the education efforts of the Institute, but acknowledged in winking fashion that “sometimes frustrated jazz musicians end up with another life, and it works out pretty well.”

A celebratory tone was struck throughout the evening. Co-host Kevin Spacey swung “Fly Me to the Moon” with off-handed grace, and Dianne Reeves gave a smoky reading of “Love Is Here to Stay,” with a silky-smooth solo from guitarist Kenny Burrell. Tenor saxophonist Joshua Redman and trumpeter Jon Faddis galvanized “Blowing the Blues Away” and Chaka Khan transformed “I Loves You, Porgy” as only she can, supported by a full-bodied solo from last year’s Monk competition winner, tenor saxophonist Melissa Aldana. Joined by her protégé, trumpeter Theo Croker, Dee Dee Bridgewater uncorked some viciously potent scat on “Oh, Lady Be Good,” while Queen Latifah brought her skills as an actress to bear on her passionate original composition “Georgia Rose.” Performing his Oscar-nominated “Happy,” Pharrell Williams tore the roof off the proverbial mother, and guitarist John Mayer and bassist Marcus Miller scorched the stage on Joe Sample’s “Put It Where You Want It.” Mayer also took a ripping electric solo on Robert Johnson’s “Dust My Broom,” with Taj Mahal roaring the vocals.

Presenters Don Cheadle, Goldie Hawn and Billy Dee Williams waxed eloquent about the free high-school and collegiate programs the Monk Institute provides throughout the world, and United Airlines vice chairman James Compton, accepting the Institute’s semi-regular Herbie Hancock Humanitarian Award, praised the Institute for fostering “teamwork, unity … and the vital importance of really listening to one another.” The finalists, who played again with the support of Thomas, Whitaker and Allen, gave the Dolby audience plenty to listen to indeed. Third-place winner O’Farrill played flashy a cappella segments with a tinge of Latin flavor, while Buss, recipient of the Institute’s second-place prize, filled the theater with his powerful tone and evinced confidence in ceding solo time to Thomas. Hill won top honors and the Concord deal with the finesse of a born balladeer; his lush yet intricate solo on “If I Were a Bell” took command of the melody without ever betraying its emotional intent. Hill joined the evening’s all-star cast of players, including the judges, for a rousing show-closing version of “Everyday I Have the Blues.” Given the Monk Institute’s record of celebrating the music’s best new talent, and the style with which Hill took the competition honors, his place in this grand finale can only be called very well earned.

Trumpeter, composer, arranger, and bandleader Charles Tolliver will receive the 2019 Living Legacy Jazz Award Presented by PECO in a special ceremony in Philadelphia on … END_OF_DOCUMENT_TOKEN_TO_BE_REPLACED 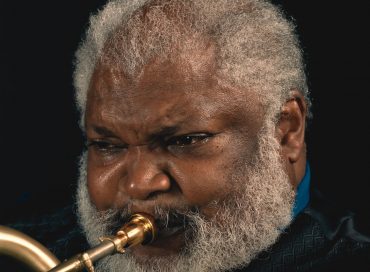 Member of Mingus’ 1960 group was also highly popular in Finland 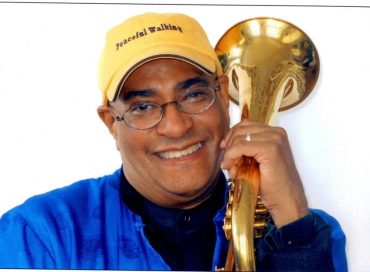 Owens will receive his NEA Jazz Masters award in January