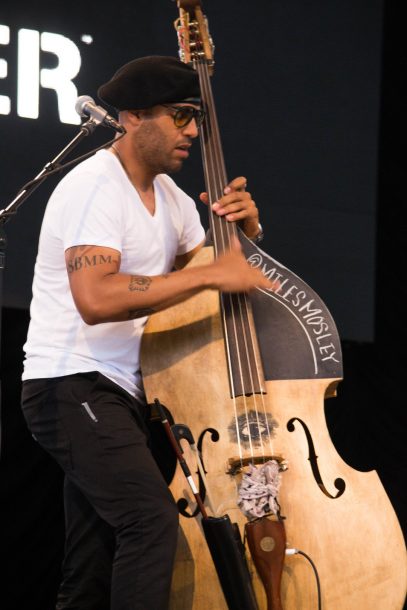 On Jan. 27, upright bass virtuoso and co-founder-voice of the West Coast Get Down Miles Mosley will release his debut album, Uprising, via World Galaxy/Alpha Pup Records.

Co-produced by drummer-engineer Tony Austin and Barbara Sealy and featuring West Coast Get Down members Kamasi Washington (saxophone), trombonist Ryan Porter, keyboardist Brandon Coleman, pianist Cameron Graves and drummer Tony Austin, joined by trumpeter Dontae Winslow and the late saxophonist Zane Musa, as well as a full orchestra and choir, Uprising is Mosley’s “personalized take on the journey of his life and that of his musical family,” according to a press release.

“It seems fitting that this new attention to our sound, and the impact that we are capable of making across genres, feels like our own uprising. This is my piece of the story,” said Mosley in the release.

Mosley helped bring together the members of West Coast Get Down, all of whom come from Los Angeles.

“I wanted to create a work that was natural and intimate, but still maintained a sense of grandeur. As if you were best friends with a giant,” Mosley added in the release. “The West Coast Get Down, the strings, the choir. All of these elements together create something with memorable melodies and a message to the people that we are here for them. We are and want to be the loudspeaker for their hearts.”

For more information on Mosley, his new album and the West Coast Get Down, visit milesmosley.com.