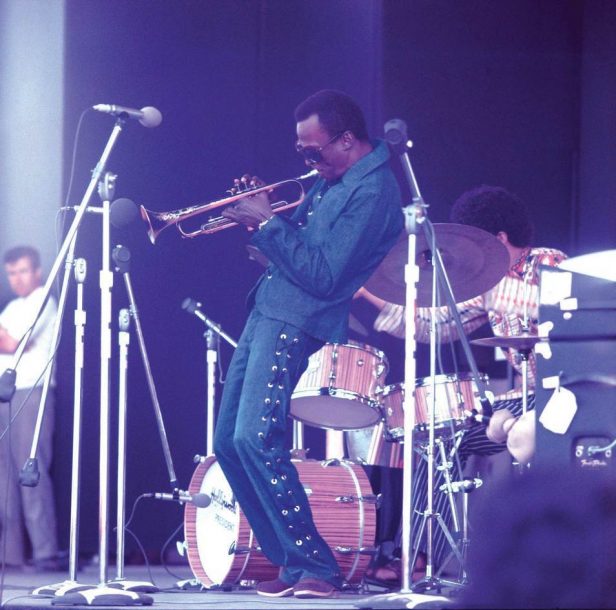 According to a press release, “The set also includes a 36-page booklet featuring a 2,200-word first-hand account by Carlos Santana (as told to author Ashley Kahn); an introductory producers’ note written by reissue producers Richard Seidel and Michael Cuscuna, providing a concise overview of Miles’ Fillmore period and the project itself, its correlation with the original Columbia double-LP, especially the additional 100 minutes of unreleased music from the shows, and 35 minutes of unreleased music on the bonus tracks; and a 2,500-word chronologic essay by Cuscuna, who was also a first-hand witness (as a disc jockey on New York’s influential WPLJ-FM) to Miles’ development at the time.”

The four-CD box set, the press release continues, “devotes one disc to each of the four nights that Miles and his group performed at the Fillmore East. As issued on the original Columbia double-LP in 1970 (Miles Davis at Fillmore) the music, whose original set lengths ranged from 46 minutes to nearly one hour, was edited by producer Teo Macero to accommodate a seamless sampling of music from each night on each of the four LP sides. Furthermore, no song titles were listed, and the LP sides were simply labeled ‘Wednesday Miles,’ ‘Thursday Miles,’ ‘Friday Miles’ and ‘Saturday Miles.'”

For the new box set, the producers returned to the original remote live recording tapes, produced by Macero and engineered by Stan Tonkel. For the bonus tracks, the producers chose three songs from the April 1970 Fillmore West shows that were in the band’s repertoire, but were not performed at the Fillmore East in June.

Since Miles Davis’ death in 1991, his estate has been careful about endorsing products that use his name. There were the Miles Davis Tribute Jazz … END_OF_DOCUMENT_TOKEN_TO_BE_REPLACED

Stanley Nelson’s Grammy-nominated documentary Miles Davis: Birth of the Cool is entering the next phase of its existence. Following several showings at film festivals and … END_OF_DOCUMENT_TOKEN_TO_BE_REPLACED

The first official music video for Miles Davis’ “Moon Dreams” has been released today by Blue Note/UMe, in association with Ingenuity Studios. The track it accompanies … END_OF_DOCUMENT_TOKEN_TO_BE_REPLACED