The 20th anniversary of the New York Guitar Festival will honor Memphis Minnie one of the instrument’s pivotal, but often overlooked, performers with a free concert on June 1 at Brookfield Place in Manhattan.

Multiple Grammy winner Fantastic Negrito, Living Colour guitarist Vernon Reid, Toshi Reagon, and Rachael Price from Lake Street Dive are some of the musicians who will perform their own interpretations of her work in tribute. See a complete lineup below.

Memphis Minnie started her career in 1929, recording the song “When The Levee Breaks” with her husband Joe McCoy. Led Zeppelin later covered the song in 1971. She also had a formative influence on the electric blues sound associated with Chicago, and her career in the 1930s and 1940s – both solo and with her later husband, Lil Son Joe – produced hit songs such “Bumble Bee” and “Me and My Chauffeur Blues.”

Memphis Minnie: In Search of the Hoodoo Lady starts at 6:30 p.m. at the Waterfront Plaza at Brookfield Place, located at 230 Vesey St., New York, NY. For more information, visit www.artsbrookfield.com.

Paul D. Miller aka DJ Spooky is a composer, multimedia artist and writer whose work immerses audiences in a blend of genres, global culture, and environmental and social issues. He’s a 2014 National Geographic Emerging Explorer and 2018 recipient of The Hewlett 50 Arts Commission Award for his latest work QUANTOPIA: The Evolution of the Internet.

David Bromberg learned guitar first hand from Rev. Gary Davis and Mississippi John Hurt on his way to becoming an in-demand session musician and accompanist. His unannounced performance before 400,000 at the Isle of Wight Festival in 1970 launched a legendary career as a recording artist and bandleader in his own right.

Guitarist Rafiq Bhatia plays in the avant-pop band Son Lux, but refers to his own music as “maximalist minimalism.”  He draws freely from jazz, rock, and contemporary classical music to create work that celebrates hybridity, both musically and personally.

Blues guitarist Jontavious Willis has wasted little time in attracting the attention of today’s living blues legends.  His mentors include Taj Mahal and Keb’ Mo, and though still in his early 20s, his songs echo the long wisdom and experience of generations of blues players.

Singer Rachael Price is a member of the surprise hit-making acoustic band Lake Street Dive.  Vilray is a singer, whistler, and swing guitarist. Together they play intimate, front-porch style music at venues ranging from small clubs to the Newport Folk Festival.

The harp has a cliched image that Brandee Younger is happy to skewer. Classically trained but inspired by the spiritual jazz of Alice Coltrane, she brings the harp to situations where it might not be expected, from jazz outings with her own quartet to gigs with hip hop and pop stars like Common and John Legend.

Nicole Atkins’s songwriting has been compared to Roy Orbison and to the legendary writing teams of the Brill Building. But she also recognizes great songwriting by others; she’s released numerous covers, including a version of “When The Levee Breaks.” Binky Griptite is best known as the lead guitarist for the late, great Sharon Jones & The Dap-Kings.

The worlds of the Caribbean and Canada come together in Kaia Kater’s life and her music. She is a banjo player, a singer, songwriter, and student of Appalachian folk music. She is also one of the four remarkable women of color – all of whom play banjo – in the group called Our Native Daughters.

Alsarah and the Nubatones

Alsarah is a singer and ethnomusicologist, and the daughter of Sudanese rights activists who fled to the US. Based in New York, she formed the Nubatones to create a new type of pop music informed by the music of Northeast Africa. The Nubatones combine the sounds of Afrobeat with Western funk and soul.

Amythyst Kiah is a southern blues/alt country singer and songwriter. Best known as a guitarist, she is also part of the banjo-playing foursome Our Native Daughters with Kaia Kater. She was featured in the film A Great American Tapestry, The Many Strands of Mountain Music, which traces the connections between the folk traditions of the British Isles and African-American music.

Abdoulaye Alhassane Toure is a singer and guitarist from Niger, now based in New York.  Banning Eyre is a veteran guitarist and long-time producer for the public radio show Afropop Worldwide.  He has produced books and recordings focused on the diversity of modern African music.

Fantastic Negrito won the Grammy for Best Contemporary Blues Album in 2016, and then repeated the feat this year. After an early career as an R&B singer (under the name Xavier), and a near-fatal car accident, he reinvented himself as a modern blues troubadour/griot.  Vernon Reid is best known as the guitarist for the rock band Living Colour and is on Rolling Stone’s list of the 100 best guitarists of all time. He is a regular guest of the New York Guitar Festival. 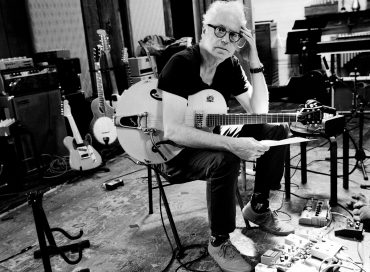 Under normal circumstances, the New York Guitar Festival (NYGF) would be presenting a variety of live in-person performances this spring. But this being the age … END_OF_DOCUMENT_TOKEN_TO_BE_REPLACED