Matthew Garrison, a jazz bassist who operates the Brooklyn music venue ShapeShifter Lab, is holding a virtual party on Thursday, August 12, to launch his latest endeavor: a pair of mobile apps.

The event, which will be livestreamed from ShapeShifter, also marks the release of Generations, a new album that the bassist recorded with saxophonist Ravi Coltrane and drummer Marcus Gilmore.

Garrison’s apps include the eponymous Matt Garrison app—a “living archive” of Garrison’s creative works that was released in June—and TuneBend, a new way for musicians to play, record, and release music, which will be available in the fall. The technology in TuneBend is supposed to help musicians in working together remotely; its eventual goal is to enable players to sell music through the app as well.

The son of legendary bassist Jimmy Garrison (who played with Coltrane’s father John from 1961 to 1967) developed the apps as a participant in Apple’s Entrepreneur Camp for Black Founders and Developers in February.

The virtual launch party will begin at 6 p.m. EDT with a performance by Garrison, Coltrane, and Gilmore. A live Q&A will follow at 6:30.

For more information or to submit a question for the Q&A, visit the ShapeShifter Lab website.

Matthew Garrison: From the Bottom Up 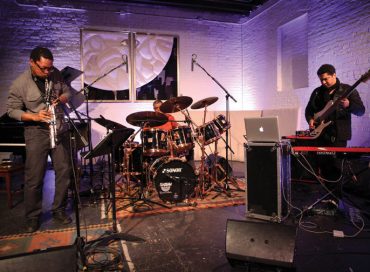 After 10 years in its location on Whitwell Place in the Gowanus/Park Slope section of Brooklyn, ShapeShifter Lab has announced plans to move to a … END_OF_DOCUMENT_TOKEN_TO_BE_REPLACED