Late piano legend Chick Corea and bandleader/composer Maria Schneider each won two trophies at Sunday night’s 63rd Annual Grammy Awards. Held in Los Angeles, the ceremony was originally scheduled to take place on January 31 but was postponed until Sunday as a precaution against creating a COVID-19 superspreader event.

Corea, who died on February 9 from a rare form of cancer, posthumously won two of five awards in this year’s official jazz categories—his 24th and 25th Grammys. Trilogy 2 with Christian McBride and Brian Blade, like its 2013 prequel, was honored as Best Jazz Instrumental Album. Corea had previously won the category in 2012 with Forever and was a nine-time winner of its predecessor category, Best Jazz Instrumental Performance by a Group. He also won the Best Improvised Jazz Solo award (a category in which he has won five times before) for his work on Trilogy 2’s “All Blues.”

The evening’s other recipients of jazz Grammy gold were also repeat winners. Schneider won Best Large Ensemble Jazz Album for Data Lords, recorded with her eponymous orchestra, and also scored in the composing/arranging category, with her “Sputnik” winning for Best Instrumental Composition. The awards were her sixth and seventh, respectively. Her fellow bandleader/composer Arturo O’Farrill took the Best Latin Jazz Album trophy, his sixth Grammy, for Four Questions, made with his Afro Latin Jazz Orchestra. Singer Kurt Elling and pianist Danilo Pérez received the Best Vocal Jazz Album honors for Secrets Are the Best Stories; it was Elling’s second Grammy and Pérez’s third.

In related categories, fusion/jam band Snarky Puppy won the Best Contemporary Instrumental Album Grammy for Live at the Royal Albert Hall. Another celebrated jazz arranger, John Beasley, took home the gold for Best Arrangement Instrumental or A Cappella with his chart for Charlie Parker’s “Donna Lee.” Pop icon James Taylor was the recipient of the Grammy for Best Traditional Pop album for his standards collection, the suitably titled American Standard. And two genre-resistant artists, Robert Glasper and Thundercat, won major awards in the R&B categories this year: Glasper for Best R&B Song (“Better Than I Imagined”) and Thundercat for Best Progressive R&B Album (It Is What It Is).

A full list of winners at the Grammy Awards ceremony can be found here.

In the wake of Chick Corea’s passing on Tuesday (Feb. 9), bassist Christian McBride—whose friendship and creative partnership with the late jazz giant stretches back … END_OF_DOCUMENT_TOKEN_TO_BE_REPLACED

The nominees for the 2021 Grammy Awards were announced on Tuesday. It was a banner year for female nominees, with women taking five of the … END_OF_DOCUMENT_TOKEN_TO_BE_REPLACED

As the COVID-19 pandemic continues to rage and the world grapples with the prospect of reopening, musicians from around the globe will come together—virtually, from … END_OF_DOCUMENT_TOKEN_TO_BE_REPLACED 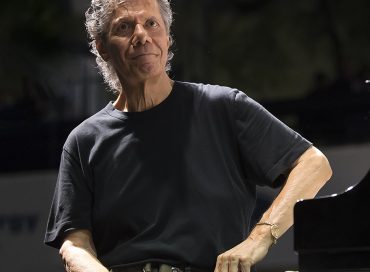 As we’ve noted elsewhere, this year’s International Jazz Day is chock full of online events of all sorts. If you’re looking for a little something … END_OF_DOCUMENT_TOKEN_TO_BE_REPLACED