Heading into the third day of my mini-marathon of live jazz shows in New York City, I felt both energized and exhausted. Energized by seeing so much great music and by sitting with actual audiences, exhausted by the effort. Although I like to pretend I’m a New Yorker with my resigned expressions and my mastery of the subway system without consulting a map or app, I sometimes take a local when I should have taken an express or vice versa. So I was relieved to take a night off from all that routing, because both shows on this particular evening were located a block or two from each other in the West Village, a stone’s throw from the Village Vanguard, a landmark for us jazz fans, and a straight shot downtown from my hotel in Hell’s Kitchen.

Unfortunately, the iconic Vanguard was not one of tonight’s destinations; they haven’t yet reopened for live audiences. Soon come, as they say in Jamaica. And when Smoke also returns (sometime in the fall, we hear), we’ll be back to near normal as far as having live audiences see sets on-site at the places I’ve always frequented in NYC. Both the Vanguard and Smoke did an admirable job during lockdown presenting shows via live streams, some of which you can still view online. Every little bit helped during those dark months for both the artists and the venues. I think we’ll see more clubs stream at least a show or two every now and again, because they saw how easily those streams reached fans worldwide.

My first hit, in musicians’ parlance, was at Smalls, a club that was streaming sets way before the pandemic, bringing that aptly named basement spot an international audience who may not have minded the physical venue’s no-frills seating and not-so-great sightlines. But the mild discomfort of benches and neck-craning can be put aside, given the high level of musicianship that you get at Smalls for as many as three or four sets per night. The club’s 25-plus-year legacy is much too deep to delve into here, but in short, an impressive list of artists who now dominate the jazz world cut their teeth there initially, sitting in at late-night jams and then perhaps headlining at an early show.

On this night, my friend Mark and I watched a high-powered set from a real veteran of the NYC jazz scene, drummer Joe Farnsworth, who’s also a vital cog at Smoke, located about 100 blocks uptown. Sometimes the difference between downtown and uptown can be just a subway ride, and sometimes it’s a vast cultural chasm, but on this night two scenes meshed. Farnsworth dedicated the show to his late mentor and colleague Harold Mabern, whose family was present. As he explained midway through the set, Mabern—or “Mabes,” as Farnsworth called him—would often say, “Joe, if my wife’s feet aren’t tapping, we’re not doing it right.” From my vantage point at the back of the room, they did their best to produce that outcome, playing soulful hard bop at a fast tempo. Farnsworth had a great band to evoke “Mabes” with: Jeremy Pelt (trumpet), Immanuel Wilkins (saxophone), Alex Claffy (bass), and Julius Rodriguez, a.k.a. “Orange Julius” (piano). The audience at Smalls was diverse as usual, mixed in age, gender, and race.

The 55 Bar, located next to the famous Stonewall Inn on Sheridan Square, is another West Village club with a long history and remarkable legacy, albeit one rooted in a more electric and funky sound. Many a jazz fusion project has been workshopped there, most famously Jaco Pastorius’ trio with Hiram Bullock and Kenwood Dennard back in the ’80s. The 55 is that rare beast in New York City, a good old-fashioned bar with sawdust on the floor, a dirty bathroom, and top-shelf live music every night. Its grittiness reminds me of bars like J.C. Dobbs or the Khyber Pass in my Philadelphia past, although this NYC version features higher-profile artists like Donny McCaslin and Chris Potter.

Mike Stern has played regularly (really regularly) at the 55 for many years, so it was no surprise for me to run into a Monday Night with Mike show. It turns out that one of the few upsides to the pandemic is the opportunity it’s given spouses to spend more time together. That’s been particularly true for two-musician households like Brandee Younger and Dezron Douglas or Antonio Sánchez and Thana Alexa—or in this case Mike and Leni Stern, a guitar-playing couple who rarely play together. But for Mike’s two sets at 55 Leni was there, bringing out her African stringed instruments as well as her Fender Strat to blend with Mike’s trademark Telecaster and instantly identifiable sound, reminiscent of when Boss Super Chorus pedals and the Yamaha SPX 90 were all the rage [Full disclosure: my friend Mark explained the technical aspect to Stern’s guitar sound.] Joining the couple on the 55 Bar stage, I mean floor, were Bob Franceschini (sax), Edmond Gilmore (bass), and Lionel Cordew (drums). Kyra Kverno, 55’s diminutive floor bartender and an accomplished music photographer, managed to duck around Stern and his guitar neck as he played almost on the lap of people sitting at the front tables. It’s all part of a show that’s much more about the music than any onstage theatrics.

I just finished reading an advance copy of Bill Milkowski’s excellent biography of Michael Brecker, Ode to a Tenor Titan, and I was reminded both how powerful a saxophonist he was and how few contemporary arplayers sound like him, especially among the younger generation. A longtime Stern bandmate, Franceschini clearly comes from the Brecker school of tenor, with a bright and robust sound built to order for Stern’s highly amplified music. The rhythm section drove the tunes forward in much the same way that Will Lee and Dennis Chambers did with the Brecker Brothers when Stern played with that group.

In keeping with its unpretentious vibe, the 55 Bar does not accept credit cards, so come ready with all that cash you haven’t been able to use for the last 15 months. 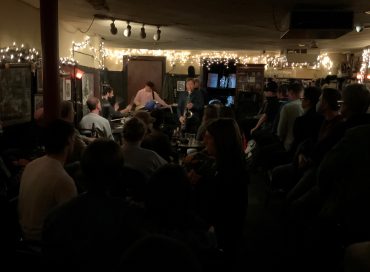 As the percentage of COVID-19 vaccinations rises and as states loosen their restrictions for gatherings, several jazz clubs and venues are reopening not only to … END_OF_DOCUMENT_TOKEN_TO_BE_REPLACED

It’s no secret that jazz clubs have suffered mightily during the pandemic, crippled by the inability to regularly present live music (and food and beverages) … END_OF_DOCUMENT_TOKEN_TO_BE_REPLACED

When I initially came up with the premise for this seven-day series on live streams of jazz performances online, I had this fantasy that I … END_OF_DOCUMENT_TOKEN_TO_BE_REPLACED