Van Gelder, probably the most famous and sought-after recording engineer in jazz between 1952 and his death in 2016, had his Englewood Cliffs facility purpose-built in 1959 after a design by architect David Henken. While he kept his recording techniques a closely guarded secret, it is understood that the acoustics of the studio were a significant part of the equation. The large, five-sided room includes brick tiles and a 39-foot domed wooden ceiling.

The studio is even more revered for the talents that have passed through it. Customers at Van Gelder’s have included Miles Davis, Sonny Rollins, Coleman Hawkins, Art Blakey, Ahmad Jamal, and John Coltrane. Almost every Blue Note Records session between 1959 and 1975 took place at the Englewood Cliffs studio, as well as classics for Impulse! (Coltrane’s A Love Supreme), CTI (Freddie Hubbard’s Red Clay), Prestige (Shirley Scott Plays Horace Silver), and many other labels.

Live from Rudy Van Gelder’s Studio marks the first time that a live event has been broadcast from the studio. For the inaugural episode, Carter leads a band that also includes tenor saxophonist Joe Lovano, pianist Isaiah J. Thompson, and drummer Kenny Washington.

More information and ticket sales can be found at the series’ website. 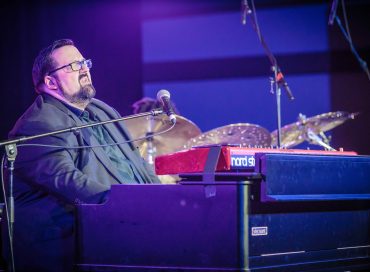 Noted organist Joey DeFrancesco will perform a concert on Friday, May 15 from the Van Gelder Studio in Englewood Cliffs, N.J., where he’ll play the … END_OF_DOCUMENT_TOKEN_TO_BE_REPLACED