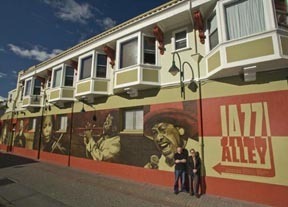 The Kuumbwa Jazz Center in Santa Cruz recently celebrated its 35 years of presenting jazz by unveiling a mural called “Jazz Alley,” a 80-foot-by-12-foot mural depicting five noted jazz artists-Christian McBride, John Scofield, Regina Carter, Roy Hargrove and Betty Carter. Tim Jackson, the artistic director of Kuumbwa Jazz since its early days, says that those artists were specifically chosen because of their connections to the center and its history. “I tried to make it a diverse group,” Jackson adds.

It took Santa Cruz visual artist Marvin Plummer about 19 days to paint the mural. Plummer adopted his duotone painting style from the famed 40s & 50s Blue Note jazz album covers. Somehow through the miracle of modern technology, Plummer created a six-minute time-lapsed video of the entire painting process. In the video which can be viewed here Plummer explains his methodology and vision for the mural.

Jackson says that Plummer was picked for this assignment based on a RFP that went out through the Santa Cruz Arts Commission. “Marvin was the overwhelming choice for us,” says Jackson. “We honed in on him quickly. He was a great guy who loves jazz and he really caught our vibe.”

Plummer painted the mural on the wall of a building on the alley, which was Birch Lane and which was renamed Jazz Alley. Jackson says that the owner of that building, a storefront with some apartments above it, turned out to be a big fan of the work. “The guy who owns it is Jack Cross, an oldtime Santa Cruz landlord,” explains Jackson. “He loved this project. He comes across as taciturn sort of guy, but he got so into it. He was happy to see the art on his building. We featured him in the presentation. [This project] brought us in touch with some of our neighbors that we hadn’t been able to connect with in years.”

The Kuumbwa Jazz Center has certainly been a part of the Santa Cruz community for a long time. The Center was founded in 1975 by Rich Wills, who enlisted the help of Jackson and Sheba Burney. “Our goal was simple: A home for jazz in Santa Cruz,” says Jackson. “One of the things I’m most proud of is that after 35 years our mission is really the same. We are one of the few jazz organizations that operates its own facility as a non-profit. We’re not running around renting venues. We’re here all year round, so we operate like a club does. There’s music happening practically every night of the week.”

There is one difference between the Kuumbwa of the ’70s and the present-day organization. Back then, jazz education wasn’t a priority on their list or on hardly anyone’s list, for that matter. Now, besides presenting about 120 shows per year, Kuumbwa has four main educational projects. They produce a summer jazz camp at Cabrillo College for Santa Cruz County high school students. They have a Kuumbwa honor band which is geared to high school students in the area. They host master classes throughout the year that are free to the community. And they have an artist-in-residence where they bring in a regional artist that works with the organization over a two year period with both their education and presenting goals.

Jackson says that he’s seen the effect of Kuumbwa’s educational programs in very personal terms. “When you have an education program that you’ve developed over a period of about 15 years, it’s amazing to see the growth of the students that have come through the program and how they move on through the years,” he says. “There have been so many, including Remy and Pascal LeBouef, Ben Flocks, Jesse Scheinin, Donny McCaslin and Kenny Wolleson. We don’t lay claim to being responsible for everything these young people do, and some of them are middle-aged at this point, but Kuumbwa really played a role in their development. These are kids that directly came from our local community. It makes us feel good to know that we were able to pique their interest in jazz at a very early age and move them on to the next level.”

Then there are the shows. Also the artistic director of the Monterey Jazz Festival, Jackson figures that the Center has presented around 4,500 in its history, though he’s never taken the time to get the exact figure. He also has some trouble picking out a favorite show out of the many presented there. “For me personally, I suppose it would be the first time that we were able to present some of my personal heroes like McCoy Tyner, Bobby Hutcherson and Cedar Walton and how we developed that relationship over the years. Last night we did a concert with Benny Green. He used to take the bus down from the Bay area to do gigs when he was in high school. And it’s gone from that to having him be here over the years with people like Benny Carter, Ray Brown and Art Blakey and now coming back with his own group. You really see the historical aspect of it kick in.”

He also recalls an emotional performance that happened about nine years ago. “I remember that first concert of the Directions in Music band with Herbie Hancock, Michael Brecker, Roy Hargrove, John Patitucci and Brian Blade. They did their first concert here and it was right after 9/11. They spent about four days here rehearsing. It was a very emotional time and it was very healing with the music happening at the Center. To be around musicians like that at a time like that and on a daily basis was really inspiring.”

Jackson believes that Kuumbwa’s mere presence is its most unique aspect. “We have been able to sustain an organization and a venue for such a long period of time in such a small market,” he explains. “There are only 60,000 people that live in Santa Cruz. We’re not even a secondary market. We’re a tertiary market. We’re off the beaten path. To develop these long-term relationships with these artists and to have our own community be so supportive of what we do, I think that’s pretty unique.”

Coming up in 2011, the Center will continue to present a broad cross-section of jazz styles and artists, including some at larger venues in the Santa Cruz area. “In addition to the shows we present here, we present shows at the Civic Auditorium for large concerts and the Rio Theatre for mid-sized concerts,” says Jackson. “We’ve got Wynton Marsalis and the Jazz at Lincoln Center Orchestra coming into the Civic Auditorium this summer with Esperanza Spalding coming in the fall. At Kuumbwa, we’ve got Steve Coleman and Five Elements, Jim Hall, Barbara Dennerlein, Dafnis Prieto… We really feel an obligation to present a full spectrum of jazz-from the Ethnic Heritage Ensemble who we presented recently to Al Di Meola’s World Sinfonia in a few weeks.”

For more information or a schedule of upcoming performances at the Kuumbwa Jazz Center, you can visit their website.