Tenor saxophonist Kamasi Washington’s short film, As Told to G/D Thyself, which is inspired by his most recent album, Heaven and Earth, released on the Young Turks label in June, will premiere in January 2019 at the Sundance Film Festival in Park City, Utah.

Along with debuting the film, Washington will also play a show early next year at New York’s Apollo Theater in partnership with Afropunk. The Feb. 23 show will headline the venue’s “Race Music” weekend, featuring a number of film screenings in partnership with ImageNation Cinema Foundation, Firelight Media, and more.

For more information about the Apollo show and to buy tickets, go here.

As Told to G/D Thyself will not be the only jazz-related film to premiere at Sundance; it was recently announced that a documentary on Miles Davis called Miles Davis: Birth of the Cool will be screened for the first time at the festival.

The Festival International de Jazz de Montréal (also known in the U.S. as the Montreal International Jazz Festival) has announced the lineup for its 2022 … END_OF_DOCUMENT_TOKEN_TO_BE_REPLACED 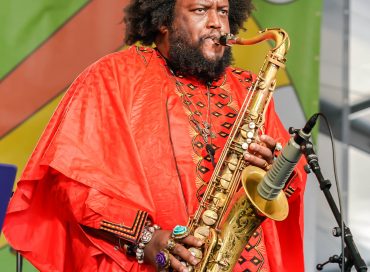 UPDATE 2/3/22: You can watch Kamasi Washington’s high-powered Tonight Show rendition of “The Garden Path” below. If all goes well, tonight (Feb. 2) should be … END_OF_DOCUMENT_TOKEN_TO_BE_REPLACED

Two jazz giants—pianist Herbie Hancock and saxophonist Kamasi Washington—will take the stage together this summer on a co-headlining tour. Ten shows by the duo are … END_OF_DOCUMENT_TOKEN_TO_BE_REPLACED

On Dec. 29, a Duke Ellington concert film not seen for more than 50 years will receive its first public viewing since its original broadcast … END_OF_DOCUMENT_TOKEN_TO_BE_REPLACED