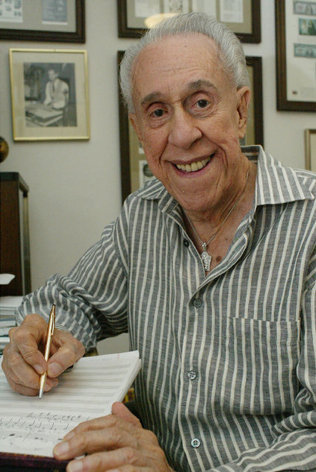 José Curbelo, a Latin music pianist, bandleader and manager who gave the young Tito Puente a break and was instrumental in the rise of the cha-cha-cha, died Sept. 21 of heart failure in Aventura, Fla. He was 95.

Born in Havana in 1917 to an American father who played violin, Curbelo began playing music at age 8 and later played with Los Hermanos Lebartard and flutist Gilberto Valdes. Curbelo co-founded the Orquesta Havana Riverside, but his career took off in the early 1940s after he’d moved to New York. He played in the bands of Xavier Cugat and Juancito Sanabria and formed his own group in 1942, leaning toward the mambo style. Tito Rodriguez, Candido and Tito Puente, then in his teens, were among the later-famous Latin musicians who worked in Curbelo’s orchestra. Curbelo’s group performed in popular nightclubs in New York and Miami as well as resorts in the Catskills.

Among his best known recordings are “Managua, Nicaragua,” “Cha Cha Cha in Blue” and “La Familia.”

After his group broke up, Curbelo went into artist management and booking, and by the 1960s he’d become one of the top promoters of Latin music in the country. Even after he moved to Miami in the ’80s, he continued to book Latin artists.