Through eBay, fusion innovator John McLaughlin is auctioning off the custom double-neck PRS guitar he has played throughout the “Meeting of the Spirits,” his historic final U.S. tour concluding Dec. 9 in Los Angeles. McLaughlin has used the guitar to perform classic Mahavishnu Orchestra material like “Birds of Fire” and “Meeting of the Spirits,” making the instrument an important part of the tour’s mission to revisit the past with spirit. It features a 12-string neck and a six-string neck, with a tremolo arm for the six-string component.

Covering the tour’s New York City stop in early November, JT editor Evan Haga wrote: “Even if an Orchestra reunion has become something of a jazz chimera, there were many delightful invocations of the past at the Town Hall. Not the least of these was McLaughlin’s double-neck PRS guitar, whose very sight inspired whoops from the fanboy-men and brought to mind those classic early ’70s photographs of the guitarist clad only in white and playing his hulking Gibson EDS‑1275. (I can’t help but think JT’s Mac Randall had something to do with the making of this PRS instrument. Read the closer of this Q&A.)”

“It’s a magnificent instrument and it’s already priceless to me,” McLaughlin wrote on eBay. “It’s for this reason I wish to auction it after my tour in December 2017, to raise money for a non-profit organization in Ramallah [Palestine], who are healing through music therapy, traumatized children and women. The entire proceeds from the sale of my guitar will go to the Music Therapy Center in Ramallah.”

Spirit Road: a JT interview with McLaughlin and his tour-mate Jimmy Herring

Collings Guitars, based in Austin, Texas, has announced a new Julian Lage signature model guitar – the Collings OM1 JL. With a design that pays … END_OF_DOCUMENT_TOKEN_TO_BE_REPLACED

On July 14, jazz-fusion guitarist and composer John McLaughlin was awarded an honorary doctor of music degree by Berklee College of Music at the Valencia, … END_OF_DOCUMENT_TOKEN_TO_BE_REPLACED

Dates for “Meeting of the Spirits,” John McLaughlin’s first extensive U.S. tour in seven years and final Stateside tour, have been announced, and will run … END_OF_DOCUMENT_TOKEN_TO_BE_REPLACED 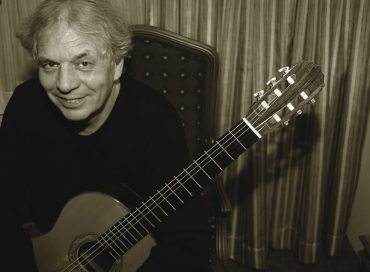