The Recording Industry Association of America (RIAA) keeps track of album sales collectively and individually—and it keeps keeping track of those albums for years, even decades. Which is how John Coltrane’s A Love Supreme, a 1965 release that is one of the most famous and iconic jazz albums, has—after 56 years—been certified platinum for sales of one million copies in the United States.

It is the first jazz album from the 1960s to receive the certification.

Coltrane’s son Ravi and daughter Michelle (the child of his second wife, Alice McLeod Coltrane) received a platinum plaque for the album in a ceremony at the John & Alice Coltrane House in Dix Hills, Long Island, in the first week of November, Variety magazine reports.

The album was previously certified gold (sales of 500,000 copies) in 1970. It has taken over half a century to double those sales.

Interest in the suite, always strong, has been reignited recently. In October, Impulse! Records issued A Love Supreme: Live in Seattle, the second of only two known live recordings of Coltrane performing the full piece. 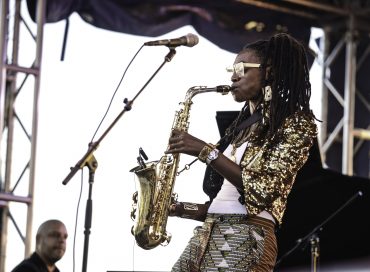 The version of John Coltrane’s A Love Supreme that we all know—recorded in Rudy Van Gelder’s Englewood Cliffs, New Jersey, studio on December 9, 1964 … END_OF_DOCUMENT_TOKEN_TO_BE_REPLACED

Blue World, a never-before-heard recording by John Coltrane, will be released September 27 in CD, vinyl LP, and digital editions via Impulse!/UMe. Recorded in June 1964, … END_OF_DOCUMENT_TOKEN_TO_BE_REPLACED

In 1958, John Coltrane was not yet what he would soon become: one of the most important innovators in the jazz tradition. But his work … END_OF_DOCUMENT_TOKEN_TO_BE_REPLACED