Only two shows tonight. Hey, don’t judge. It’s Tuesday night. As I’ve written before, everyone playing and presenting jazz goes for the Thursday-through-Sunday period; after decades of repetition, it’s just plain built-in for jazz people. “Back in the day” is still our day in that regard. Future streamers, take note: Tuesdays are wide open.

Both shows tonight, though very different, were streamed live on Facebook. That platform offers so many advantages. No need to list them. They’ve just made it easy for all of us, presenters and fans alike. You don’t see complaints in the Comments section about not being able to log on or hear the content. It just plain works. The upside for fans, and the downside for the artists, is that it’s FREE. And that’s why you’ll see those tip jars or requests for donations via Venmo, PayPal, and HelpmeImjusttryingtosurviveasanartistmakingmusicyoulove. I made up the last one, which I’ll need to shorten on behalf of my friends and colleagues, but the message is no less true. Many of us are struggling, but if you’re not, throw a few bucks toward these artists and organizations.

Every NYC jazz club has a thing they call a minimum. Something you don’t see very much elsewhere. Then again, any dining-out experience can result in a little check shock at the end. Heck, I can’t get out of a restaurant with some friends or family before spending in serious double figures—so I probably need to constrict my circle. And their taste. But jazz clubs there in “The City” figured out a long time ago that us jazz fans were there in their establishment to hear the music, not necessarily to drink or eat. So perhaps that can be our baseline for contributions online: what we would have spent in the club had we been sitting there listening to the music live. A scenario that we’re all looking forward to.

Hailing from the jazz capital of Akron, Ohio, guitarist Dan Wilson has apprenticed with high-profile jazz bandleaders like Joey DeFrancesco and Christian McBride. He’s also clearly learned a lesson or two from Emmet Cohen, which whom he played in McBride’s Tip City band, at least in terms of marketing himself. Wilson grabbed the 7 p.m. Tuesday time slot for the Facebook series he calls DTC Live, which this week was streamed from the AV Club in downtown Akron, with the DTC standing for bandmembers Wilson, David Throckmorton (drums), and Cliff Barnes (organ). At least that’s what I think it stands for.

For an hour each week, this classic organ trio performs a mix of groove, funk, and jazz. Tonight they covered Stevie Wonder’s “Don’t You Worry ‘Bout a Thing,” Bobby Hutcherson’s “Montara,” “Killing Me Softly,” SWV’s “Rain,” and the Gap Band’s “Yearning for Your Love.” (Pop quiz: Who wrote “Killing Me Softly”? And no, it wasn’t Roberta Flack.) Wilson is one of those young musicians who already seems to have absorbed just about every style of jazz and manages to integrate it all into his own sound. It’s no wonder that he came to the attention of McBride and DeFrancesco. By doing these weekly gigs, the band has built a great rapport musically and personally, as evidenced by the easygoing joking and gibing between songs.

Like Cohen, Wilson has arranged with multiple organizations to sponsor or co-host the stream (including JazzTimes), and that can really make a difference as far as reaching a wider audience. It’s another high quality multi-camera shoot that looks and sounds great.  Hosted on Facebook, it’s therefore free, but with the ubiquitous PayPal and Venmo tip jar or, as Wilson calls it, a digital collection plate. Praise the Lord. These young men are working hard for their money every week there in Akron. Put them on your schedule. What else are you doing on Tuesday night?

One added note: If you go searching for Dan Wilson on whatever platform, keep in mind that he is not the most famous musician named Dan Wilson. That honor would go to the former leader of the ’90s rock band Semisonic and the songwriter for hits like “Closing Time,” “Someone Like You,” and “Not Ready to Make Nice.” Damn, I should have included Dan in my piece called “What’s in a Name?” about jazz musicians who share the same name with rock stars or jazz legends. Then again, I also missed the jazz pianist Jon Mayer. Anyway, throw “jazz” into any search for Dan Wilson and this remarkable guitarist is sure to be on top. Deservedly so.

This concert—some of which was streamed live from the National Jazz Museum in Harlem—was billed as the CRIB Collective Live. The first part featured the duo of the creative vocalist Jazzmeia Horn and the underrated pianist Keith Brown doing an interesting mix of standards and originals. I loved hearing Horn’s own songs “Free Your Mind” and “When I Say,” the latter a tune written to her two toddler children with a message that every parent will feel, and done very much in the style of Betty Carter, one of Horn’s many inspirations. Ms. Horn has a very cool holiday project coming out, so look for that.

The third half of the show (yeah, I know) featured the Virgin Island Jazz Collective. Unfortunately, Harlem native Sonny Rollins —whose family came from the Virgin Islands—was not part of that ensemble, but the youthful group, which of course included steel pans, performed a short set of funky island jazz pre-recorded in virtual Hollywood Squares style.

Between the two performances, the organization did a silent auction, curated by Tyson Hall, with jazz-themed artwork from various artists available to viewers. It was lo-fi PBS, but all the better. Because in this case, we see the place where it happens and the people who make it happen.

During this week of watching shows from various organizations, a theme recurs. There are so many organizations who are not only devoted to presenting the artists and the music, but who also are really struggling to survive sans live performances. We need to see them come out on the other side of this pandemic. So, just as you can buy take-out from your favorite restaurant, you can spend just a few bucks on a membership, donation, or merch. For my part today, I bought a T-shirt and some vinyl.

I wonder if I could get a gig doing fund drives for television. Nope. My TV days are long gone, right along with my long brown hair.

Stream on Facebook page of National Jazz Museum in Harlem.
Cost: Free (did I mention that they accept donations?)

The Chicago Jazz Festival, one of the nation’s largest free jazz festivals, returns as an in-person event on September 1-4, 2022, with a full schedule … END_OF_DOCUMENT_TOKEN_TO_BE_REPLACED 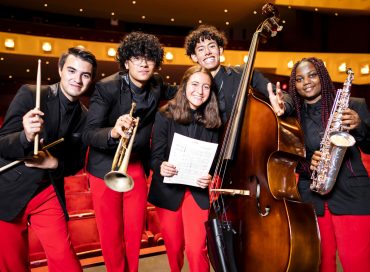 Carnegie Hall has announced the schedule for the first U.S. tour by its NYO Jazz ensemble, which will follow the release of their first full-length … END_OF_DOCUMENT_TOKEN_TO_BE_REPLACED 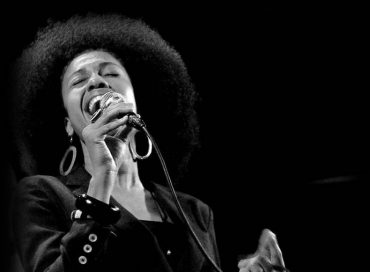