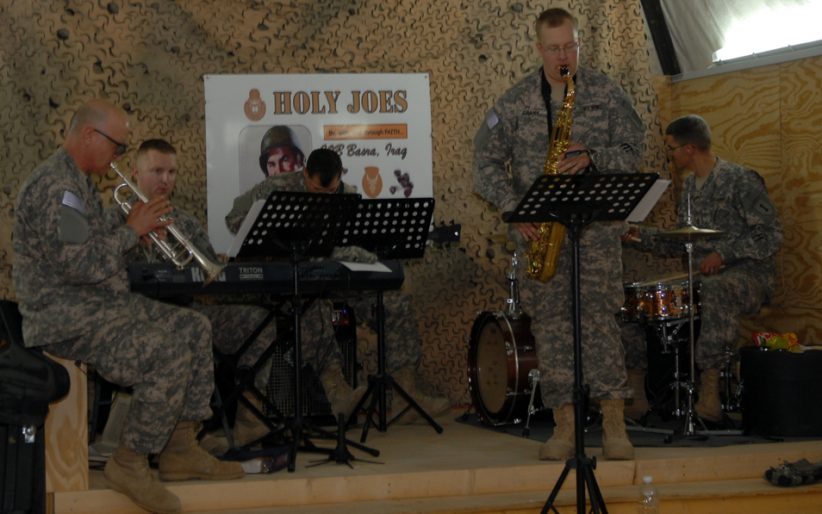 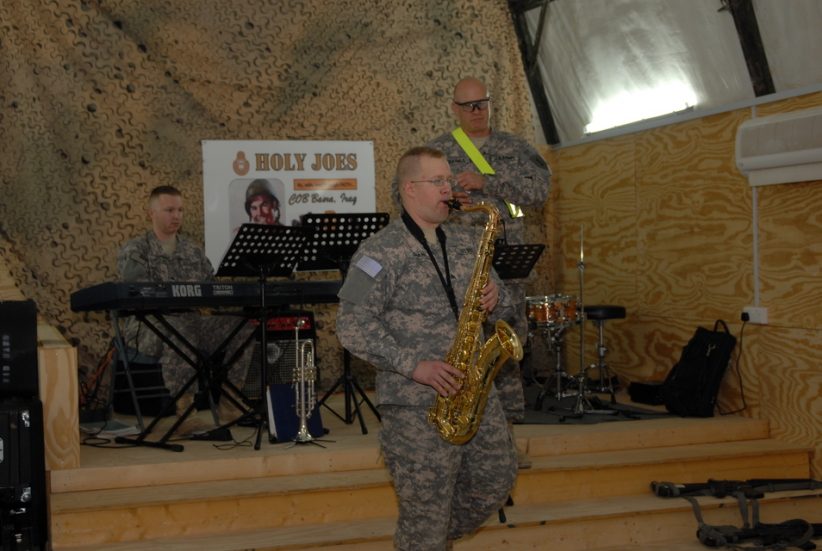 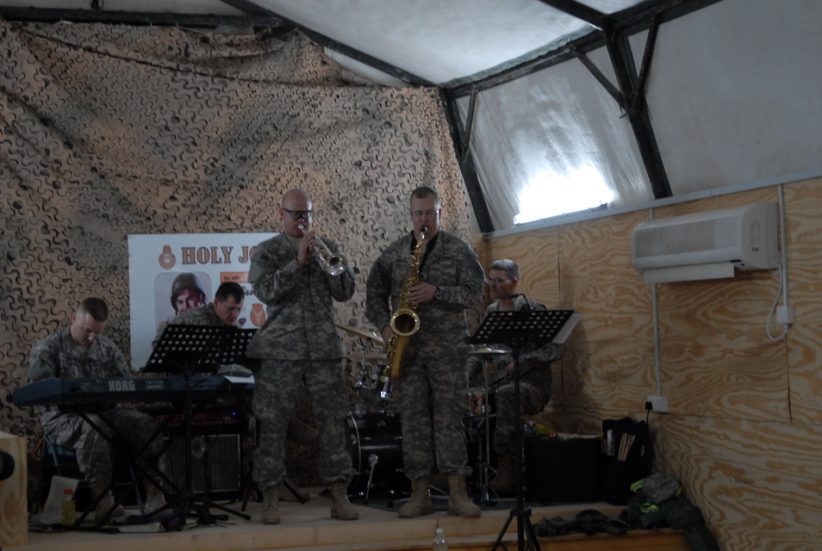 COB BASRA – While Soldiers relax in “Holy Joes” on Contingency Operating Base Basra, there are clunks and chatter from the stage. The 1st Infantry Division Jazz Band is bringing in their equipment. Power cords are being run, instruments tuned and fingers and lips limbered. Sgt. James D. Shank, saxophone player for the 1st Inf. Div. band and Baltimore, Md., native, is preparing himself for a nearly two-hour set. Behind him is the rest of the band: Sgt 1st Class Dan Rhoades on the bass guitar, Sgt. 1st Class Brandy Hagin playing the drums, Staff Sgt. Greg Ybarra on the trumpet and Sgt. Brendan Osweiler playing the keyboard.

Shank comes off as a quiet sort of soldier. He isn’t overly engaging to the crowd gathered in the chapel, preferring to let them go about their conversations and board games. The 26-year-old lets his talents speak for him, seeming at home as soon as his hands take hold of the saxophone. As the dulcet tones pour from his instrument, he falls into the music.

Despite his relative youth, Shank has had a love of jazz from an early age. It started at a jazz concert when he was 11. As soon as he heard the saxophone, he fell in love, he said. “I started listening to jazz more and more after that,” Shank said. He was influenced by a wide range of saxophonists, from the classic innovator John Coltrane to Dan Higgins, who can be heard playing the saxophone on the TV show The Simpsons as Bleeding Gums Murphy. Shank started taking private lessons and continued with them all through high school. He moved on to playing in his community college band while taking mostly general education credits.

When a recruiter found him, Shank put his demands on the table: It would be band or nothing. After basic training, he traveled to the Armed Forces School of Music in Norfolk, Va. For six months, he and other Army band members trained in music theory, took private lessons and honed the skills they came with. “Music is easy for me,” Shank said. Perhaps “easy” is not a word most people would attribute to his self-imposed training regimen. Shank will practice for hours at a time if given the chance—sometimes upwards of eight hours a day. After basic training and advanced individual training, he found himself assigned to the 1st Inf. Div.’s field band. He soon found himself moved to the jazz combo, and he has been playing with them ever since.

The jazz group isn’t the only specialized band the “Big Red One” brought with them to COB Basra. There is also a country band, two rock bands, and a salsa band is being planned. For Shank, the talent doesn’t stop with the band. Additional duties for him and the other members of the band include delivery of the Stars and Stripes newspapers across COB Basra and creating badges for local Iraqi civilians who work on base. “It’s a lot more secure now at the [entry control point],” Shank said. The access points have been consolidated into one general area, boosting security and efficiency.

Shank has been serving in the Army for the last seven years, and when he isn’t honing his skills, he is studying for the piloting exam he plans to take. Once he is ready, he hopes to move into aviation. Shank isn’t limited to just the saxophone. He is also proficient on the flute, bassoon, oboe and piccolo, he said. But it’s the sax he focuses on. “Hopefully I’ll get to play jazz with the Army in Korea,” he said. As for his musical future, Shank plans to keep playing, but ultimately as a hobby rather than a job. “Eventually you get burned out. Music should be fun,” he said. The jazz band can be heard at Holy Joes, Friday and Monday nights at 6 p.m., but they are looking to expand to other venues on base.

Swing University, the virtual adult education component of Jazz at Lincoln Center, is celebrating its 20th anniversary in 2021. It will mark the milestone with … END_OF_DOCUMENT_TOKEN_TO_BE_REPLACED

Michael Brecker used to receive one or two unsolicited cassettes in the mail, every week, from young and aspiring musicians seeking his advice and guidance. … END_OF_DOCUMENT_TOKEN_TO_BE_REPLACED

A short time from now in a club far, far away … unless you live near the PATH train … a New Jersey jazz musician’s … END_OF_DOCUMENT_TOKEN_TO_BE_REPLACED

The Michael Brecker International Saxophone Competition is now accepting applications, which are due Mar. 31. The competition, named after the late, influential saxophonist who died … END_OF_DOCUMENT_TOKEN_TO_BE_REPLACED