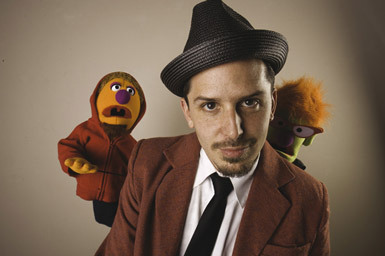 Jazz Fest week doesn’t really kick in until the start of the Louisiana Music Factory’s in-store performances. It’s a tradition that goes back 18 years, to when the French Quarter CD and vinyl outlet opened its doors on North Peters, around the corner from its current digs on Decatur Street.

Ellis was joined by irrepressible tuba man and Jazz Fest MVP Matt Perrine, playing a silver sousaphone with a mic mask-taped to its bell; pianist Brian Coogan, using a well-worn instrument, its innards exposed; and drummer Simon Lott, filling in for Jason Marsalis.

The saxophonist’s music isn’t neatly categorized. “Dubinland Carnival,” with its alternating currents of light and sadness, and breaks for waltz time, felt like lost European circus music, suitable for a Fellini circus-style music.

“Fauxfessor,” as its name suggests, was a slab of funk and vintage R&B that nodded to New Orleans piano professors. Ellis leaned into the tune’s bluesy lines, and Coogan led Perrine and Lott in some rhythmic stretching, breaking up and reassembling, his phrases hinting at Thelonious Monk.

The hourlong set, pumped up by Lott’s revved-up, interactive drumming, also included the softly swaying, somber ballad “Prom Song,” which featured Perrine’s surprisingly melodic and unsurprisingly (for the sousaphonist) fluent and beautiful solo; and the rollicking, color-shifting “Okra and Tomatoes.” Perrine, all over the place during Jazz Fest, is also celebrating a new release with his Sunflower City band, “Bayou Road Suite” on Threadhead Records.

Day One of the LMF in-store shows also included a performance by New Orleans blues man Spencer Bohren, who elicited haunting sounds from his acoustic lap slide guitar on “Ode to Billie Joe,” “People Get Ready” and “The Long Black Line,” an elegiac response to Katrina that served as the title track for his 2006 CD.

As with everything else related to New Orleans music, Jazz Fest has had a dramatic affect on the success of LMF, store owner Barry Smith said. Old favorites Tower Records, Virgin Records and Record Ron’s are long gone. A new Peaches Records is located in the old Tower store, but it’s yet to become a local favorite.

“If it weren’t for Jazz Fest, I would never have made it thus far,” said Smith, who estimates that 20 percent – or more – of his annual income derives from sales that take place during fest season. “Jazz Fest is instrumental in bringing New Orleans music to music fans all over the world. So many of our customers come back year after year.”

The in-store shows at LMF pick up again on Monday.

Michael Murphy’s jazz-accented documentary Up from the Streets – New Orleans: The City of Music was supposed to be released the old-fashioned way this spring—in … END_OF_DOCUMENT_TOKEN_TO_BE_REPLACED

A tribute to Dr. John and appearances from the Legendary Count Basie Orchestra, Chick Corea, Buddy Guy, and many more are all slated for this … END_OF_DOCUMENT_TOKEN_TO_BE_REPLACED

It was in the 1990s that Louisiana state officials decided to cut funding for music education in New Orleans schools. Alarmed at the decision, Jackie … END_OF_DOCUMENT_TOKEN_TO_BE_REPLACED