Skip to content
Become a member and get exclusive access to articles, live sessions and more!
Start Your Free Trial
Home > Blog > JazzTimes, Stylus > Introducing Stylus™, an App That Streamlines Your Path to Jazz 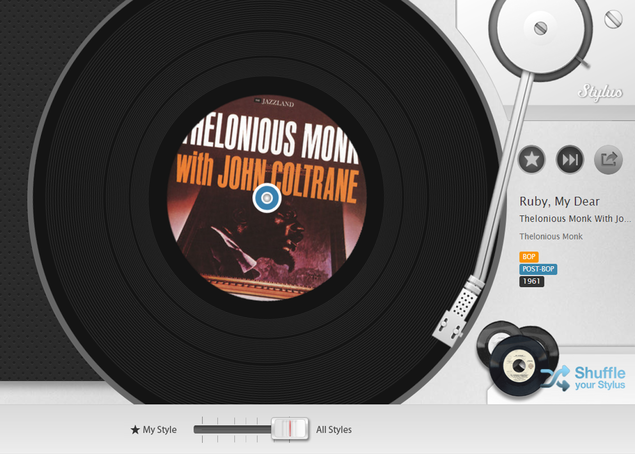 With the rise of online streaming music services, there’s more music competing for your attention now than ever before. But free rein over, say, 20 million high-fidelity tracks can be an awful lot like sitting down to one of those novella-sized restaurant menus: so much to choose from that you end up with the house salad.

The app’s welcome screen offers 10 entranceways into jazz: Big Band, Bop, Contemporary, Vocal, Cool, Free, Fusion/Latin/World, Hard Bop, New Orleans/Classic, and Soul Jazz/Groove. Inside, the music inevitably chafes against classification, but by and large, the app’s developers have done a remarkable job organizing a matrix that’s sure to steer listeners to both essential and lesser-known recordings. Stylus’™ shuffle-based player then caters to your personal tastes by using Spotify’s “star” feature (similar in function to, albeit more directed and better stocked than, Pandora Radio).

Unlike Pandora, the Stylus™ player offers the crucial options of repeating, rewinding, and backtracking through song selections. And since the music comes straight from Concord’s catalog, Stylus™ is blessedly free of licensing restrictions on your listening. For example, Pandora users can only play one track per album at a time, whereas Stylus™ leads listeners directly to a featured artist’s entire album/discography.

In addition to its seamless queue of track recommendations, Stylus™ offers dozens of “smart” top-shelf album suggestions (these come without regard to label affiliation and are available for immediate listening on Spotify), as well as subgenre information, detailed artist bios, track information and cover art, all packaged in a sleek turntable-themed interface.

In order to keep listeners in touch with the most noteworthy new jazz releases, Stylus™ includes a “JazzTimes Recommends” tab. Here, JazzTimes will curate the best of what comes across our desk.

“We’re excited to be a part of this innovative app created by Concord for Spotify,” said JazzTimes publisher, Lee Mergner. “Whether it’s providing recommendations for the most interesting new releases or sharing Artist’s Choice playlists from the publication, JazzTimes is committed to supporting this app that is certain to enhance the listening experience for jazz and music fans.”

A certain insider-ism has haunted jazz since the days when a solid education could be had from dialing the radio set or heading down to the local dancehall (hence that apocryphal line about the music, “If you gotta ask, you’ll never know”). For better or worse, streaming services like Spotify opened the floodgates-music fans across the spectrum have never had so little excuse for not keeping up with the latest and greatest. For new and old ears alike, that can be especially daunting in a genre as deeply varied and fast-changing as jazz. But between Concord’s innovative app and JazzTimes‘ authoritative coverage, you won’t even need to ask to be in the know.

With Stylus™, we’re all insiders.

Fresh off the celebration of our 50th anniversary, we’d like to announce a new initiative for our sixth decade in business: the launch of the … END_OF_DOCUMENT_TOKEN_TO_BE_REPLACED

Listen in on a conversation with vocalist Freda Payne on Sunday, Sept. 1 at the Mack Avenue Music Group Jazz Talk Tent during the Detroit … END_OF_DOCUMENT_TOKEN_TO_BE_REPLACED

Passes for the 2020 Jazz Congress, a conference that brings together members of the global jazz community to network and help expand the music’s audience, … END_OF_DOCUMENT_TOKEN_TO_BE_REPLACED