Impulse! Records released its first recording in 1961—60 years ago. The legendary jazz label, now a subsidiary of Universal Music Group, is marking that milestone with a yearlong campaign that will focus on a bevy of new releases, reissues, and other initiatives.

“Impulse! 60” began earlier this month with a relaunch of the label’s website and webstore, including limited-edition items for sale, as well as the launch of four fixed streaming playlists—Impulse! 60: The Best of Impulse! Records, On Impulse: John Coltrane, On Impulse: Charles Mingus, and On Impulse: Sonny Rollins. More playlists are in the pipeline.

Impulse! has also published the pilot episode of a new web series, Deep Dive. The pilot covers John Coltrane’s A Love Supreme, arguably the most famous and acclaimed album in the label’s history.

However, the centerpiece of the “Impulse! 60” campaign is a new four-CD boxed set, Impulse Records: Music, Message and the Moment, currently available for pre-order. The package centers on the political, cultural, and racial revolution that occurred at the label’s height (and which Impulse! helped to document), with notes by A.B. Spellman and Greg Tate.

Also available for preorder are two new installments of Impulse!’s audiophile reissue series, Acoustic Sounds: Ray Charles’ Genius + Soul = Jazz and Gil Evans’ Out of the Cool. More installments, including Oliver Nelson’s The Blues and the Abstract Truth and Sonny Rollins’s On Impulse!, are planned for later in the year.

Check out an excerpt from Ashley Kahn’s book The House that Trane Built: The Story of Impulse! Records.

Impulse! Records is introducing a new line of merchandise, including T-shirts, sweatshirts, and tote bags that draw attention to the jazz label’s iconic logo, featuring … END_OF_DOCUMENT_TOKEN_TO_BE_REPLACED 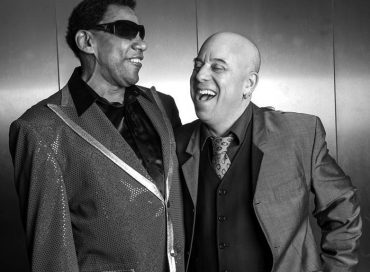