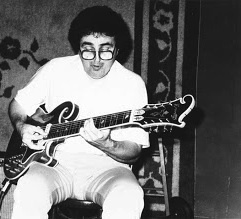 Guitarist Joe Cinderella passed away on Oct. 27 at the age of 85, in his home in Whiting, N.J., of natural causes.

Born in Newark, N.J., on June 14, 1927, Cinderella began playing guitar in his teens and was influenced by Django Reinhardt and Charlie Christian. He was a World War II vet and played jazz during his tour of service, then continued to do so from the 1950s through the ’90s.

According to a biography available at Jazz.com, he began his recording career in the 1950s, after finishing his studies, by recording and touring with Vinnie Burke and Chris Connors. He also worked with Gil Melle, Donald Byrd, Zoot Sims, Pepper Adams, Clark Terry, Kenny Dorham, Oscar Pettiford, and many others, according to the bio.

Cinderella worked as a studio guitarist and on TV commercials and film scores. He also played on sessions with an array of pop artists that included Billy Joel, Judy Garland, Neil Diamond and Barry Manilow. Beginning in 1969, according to the bio, he was also the jazz guitar instructor at Paterson State College (now William Paterson University).

According to an email from his grandson, John Van Vliet, Cinderella wrote a number of music books and was known for his unique methodologies in guitar performance and was also an accomplished pianist. His wife Angela passed away in 2005.