The New York-based Festival of New Trumpet Music, a nonprofit annual performance series that has in the past chosen such diverse horn luminaries as Lester Bowie and Wadada Leo Smith for its celebratory tributes, turns its focal energy this year to the far-reaching career of Canadian journeyman Kenny Wheeler. Wheeler, best known for his early involvement with Derek Bailey and Evan Parker in the London free-improvisation movement, and for his more recent work with Bill Frisell and Joni Mitchell, has released a steady stream of recordings from his home in the U.K. over his 50-plus-year career.

In a FONT press statement, Wheeler expressed his enthusiasm to return to New York: “Although I have played in New York a few times over the years, every time I come back I still feel the same excitement I felt that first time I visited all those years ago. For me, New York is the place to play.”

The 9th Annual Festival of New Trumpet Music will take place at the Jazz Standard, from October 20th through October 23rd. 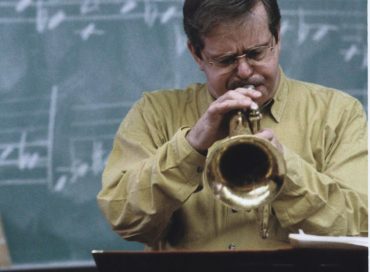 Trumpeter/composer Kenny Wheeler to be celebrated at Jazz Standard