The winners of the 47th annual ASCAP Foundation Deems Taylor/Virgil Thomson Awards for outstanding print, broadcast and new media coverage of music were announced last Monday. JazzTimes is honored and pleased that our September 2014 investigative feature story, “The Gates of the Underworld: Inside Slugs’ Saloon, Jazz’s Most Notorious Nightclub,” written by James Gavin, was one of the articles chosen.

Timothy White Award for Outstanding Musical Biography in the pop music field: Jerry Lee Lewis: His Own Story, written by Rick Bragg and published by Harper.

Other book honorees were:

· Jennifer Fleeger for Mismatched Women: The Siren’s Song through the Machine, published by Oxford University Press.

· Dennis McNally for On Highway 61: Music, Race and the Evolution of Cultural Freedom, published by Counterpoint.

· Elizabeth Hellmuth Margulis for On Repeat: How Music Plays the Mind, published by Oxford University Press.

The authors and publishers of the award-winning articles are:

· James Gavin for his article “The Gates of the Underworld: Inside Slug’s Saloon, Jazz’s Most Notorious Nightclub,” published by JazzTimes.

· Marek Poliksfor his four-part series on “New Music and Quality” in newmusicbox.org, published by NewMusicUSA.

· Peter Schmelz for his article “Valentin Silvestrov and the Echoes of Music History” published by The Journal of Musicology.

· Douglas W. Shadle for his article “How Santa Claus Became a Slave Driver: The Work of Print Culture in a Nineteenth-Century Musical Controversy” published by The Journal of the Society for American Music.

· Michael Simmons for his liner notes, “Michael Bloomfield – Who Is That Guitar Player,” from the album, Michael Bloomfield: From His Head to His Heart to His Hands, released by Sony Legacy Recordings.

· Sam Stephenson for his article “An Absolute Truth: On Writing a Life of Coltrane” published by The Paris Review.

· John Jeremiah Sullivan for his article “The Ballad of Geeshie and Elvie: On the Trail of the Phantom Women who Changed American Music and Then Vanished Without a Trace” published by The New York Times Magazine.

· Joshua Walden for his article “The ‘Yidishe Paganini’: Sholem Aleichem’s Stempenyu, the Music of Yiddish Theatre, and the Character of the Shtetl Fiddler” published by The Journal of the Royal Musical Association.

JazzTimes congratulates Mr. Gavin and all of the other recipients! The entire winning feature by James can be read here. 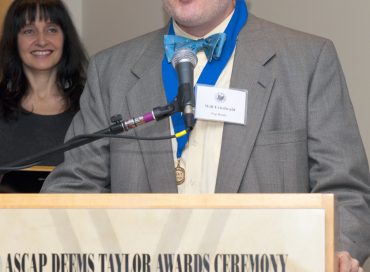 JazzTimes columnist Hentoff is among those honored