Recent years have seen a crush of jazz centennials—in particular, those of the first generation of bebop innovators. Arguably the most important of these will come later this year on August 29, the 100th anniversary of alto saxophonist Charlie Parker’s birth, and Z2 Comics is celebrating it with the September publication of Chasin’ the Bird: Charlie Parker in California, a graphic novel by jazz trumpeter and comic artist/writer Dave Chisholm, whose previous credits in this field include 2017’s acclaimed Instrumental.

Created in collaboration with colorist Peter Markowski, Chasin’ the Bird tells the story of Parker’s eventful, even calamitous 16-month stay on the West Coast from December 1945 to April 1947. What had been intended as a two-month residency in Hollywood with Dizzy Gillespie’s band was extended when Parker sold his return train ticket to buy heroin. The California stint culminated in July of 1946 with his infamous “Lover Man” recording session, followed by a hotel fire, jail time, and a commitment to Camarillo State Hospital to recover from his addictions.

The silver lining of this tumultuous period was that it coincided with Parker’s signing a contract with Ross Russell’s newly founded Dial Records. Parker would make some of his most celebrated recordings for that label, including “Yardbird Suite,” “Ornithology,” and “Relaxin’ at Camarillo” (the last of these made just after his release from the titular hospital).

When Chasin’ the Bird is published in September, it will include a flexidisc of a recording from Parker’s time in Los Angeles. A special limited edition of the graphic novel will feature a vinyl 45 with two as-yet-unannounced tracks.

Chasin’ the Bird is available for pre-order through Z2 Comics’ website. 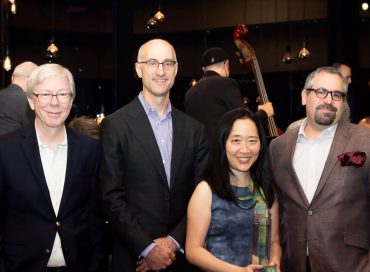 Pianist and composer Helen Sung is the winner of the 2022 Charlie Parker Jazz Composition Prize, which was presented by the performing rights organization BMI … END_OF_DOCUMENT_TOKEN_TO_BE_REPLACED

Continuing its vital fundraising efforts on behalf of musicians affected by the pandemic, the Jazz Foundation of America will present “Bird Calls,” a special livestream event celebrating … END_OF_DOCUMENT_TOKEN_TO_BE_REPLACED

These days, any live gig with an actual in-person audience gets our attention here at JazzTimes. Still, we were sure that there was a typo … END_OF_DOCUMENT_TOKEN_TO_BE_REPLACED

Charlie Parker was born this month in 1920—on August 29, 1920, to be exact, a date that has already prompted the launch of birthday observances … END_OF_DOCUMENT_TOKEN_TO_BE_REPLACED