Charles H. Chapman, 60, a longtime professor of guitar at the Berklee College of Music, passed away July 15, in Boothbay Harbor, Maine, due to a brain tumor.

As an author, he wrote nine books on guitar technique, and as a music journalist, penned more than 500 articles for music publications including Downbeat, Just Jazz Guitar, Guitar Player, Acoustic Guitar, Guitar Gallery and Guitar Shop. He was the recipient of numerous awards including a Lifetime Achievement Award from the Kirkmichael International Guitar Festival in Scotland.

Erica Muhl will be the next president of Berklee College of Music and Boston Conservatory at Berklee, according to a press release sent by Berklee … END_OF_DOCUMENT_TOKEN_TO_BE_REPLACED 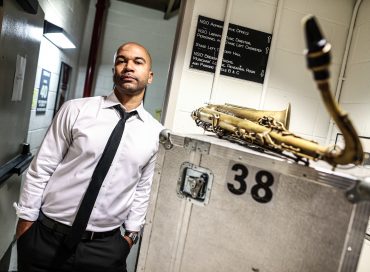 Saxophonist Walter Smith III, a Berklee College of Music alumnus who most recently taught jazz studies at Indiana University, has been named chair of the … END_OF_DOCUMENT_TOKEN_TO_BE_REPLACED