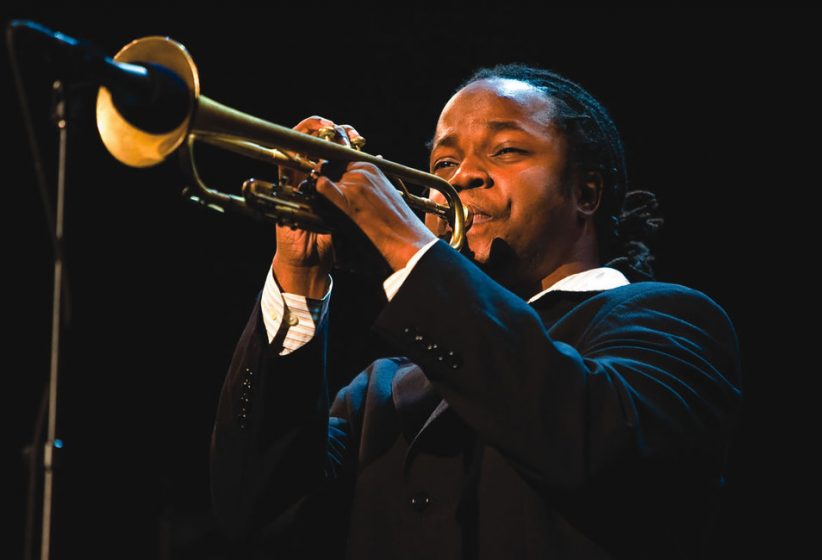 .With all the talk about major labels being out of the jazz game, it’s nice to report a good old-fashioned signing of new artist with all the incipient optimism that entails. Blue Note Records under the umbrella of the EMI label has announced the signing of trumpeter Ambrose Akinmusire, who won the Thelonious Monk Competition in 2007.

Akinmusire (pronounced ah-kin-MOO-sir-ee) hails from the Bay area, but came East to study jazz at the Manhattan School of Music. After graduating from that prestigious jazz program, he came back to the Left Coast to study at USC. In addition to winning the Monk Competition (judged by a veritable who’s who of contemporary trumpeters including Quincy Jones, Herb Alpert, Terence Blanchard, Hugh Masekela, Clark Terry and Roy Hargrove), Akinmusire won the Carmine Caruso International Jazz Trumpet Solo Competition, and released his debut recording Prelude…To Cora on the Fresh Sound New Talent label.

Akinmusire also studied at the education program sponsored by the Monk Institute of Jazz under the tutelage of Terence Blanchard. He recently performed as part of Jason Moran’s multimedia concert event In My Mind: Monk At Town Hall, 1957, and has also recorded with the likes of Steve Coleman, Vijay Iyer, Aaron Parks, and Esperanza Spalding.

Keeping thing all in the family, so to speak, the 28-year-old will go in the studio with fellow Blue Note artist Moran on board as producer. Longtime Blue Note head, now Chairman Emeritus, Bruce Lundvall sent JT the following statement about Akinmusire: “I’ve been following Ambrose for a while, and I believe he is the kind of musician that jazz needs more of. He’s finding a very distinctive voice on his instrument, has fantastic sense of adventure, and is dedicated to pushing the music forward.”

The legacy of the late trumpeter and composer Tomasz Stańko will be celebrated at an all-star memorial concert on Sept. 18 at Roulette in New … END_OF_DOCUMENT_TOKEN_TO_BE_REPLACED

Blue Note Records and Universal Music Group Africa have announced the creation of Blue Note Africa, a new label that will focus on African jazz … END_OF_DOCUMENT_TOKEN_TO_BE_REPLACED

Want to merge fashion with your love of jazz? Blue Note Records has expanded its partnership with Japanese retailer UNIQLO to create a new set … END_OF_DOCUMENT_TOKEN_TO_BE_REPLACED