Applications are now open for the 2020 Sarah Vaughan International Jazz Vocal Competition, which will be hosted by Newark’s New Jersey Performing Arts Center on November 22. Entries are due September 8 at 5 p.m. ET.

Also known as the SASSY Awards, the Sarah Vaughan Competition is a talent contest that pays tribute to the titular singer (whose career began when she herself won a 1942 talent contest at New York’s Apollo Theater). It is open to solo jazz vocalists of all nationalities who are 18 years or older and not currently signed to a major record label.

A panel of judges—including vocalists Carmen Lundy and Vanessa Rubin, bassist Christian McBride, and WBGO radio personality Gary Walker—evaluates the contestants based on vocal quality, musicality, technique, performance, individuality, artistic interpretation, and ability to swing. The prize for the winner is $5,000 and exposure to the wider jazz world, which highly anticipates and scrutinizes each year’s competition.

Singers can apply through the Competition’s website. Announcements about the plans for holding the competition are forthcoming.

On Sunday, Nov. 4, at the New Jersey Performing Arts Center (NJPAC)’s Victoria Theater in Newark, N.J., Samara McLendon—born and raised in the Bronx and … END_OF_DOCUMENT_TOKEN_TO_BE_REPLACED 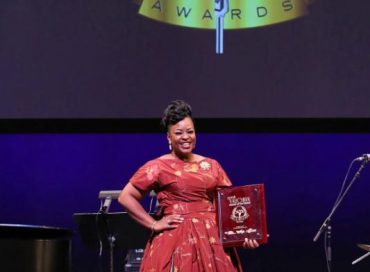