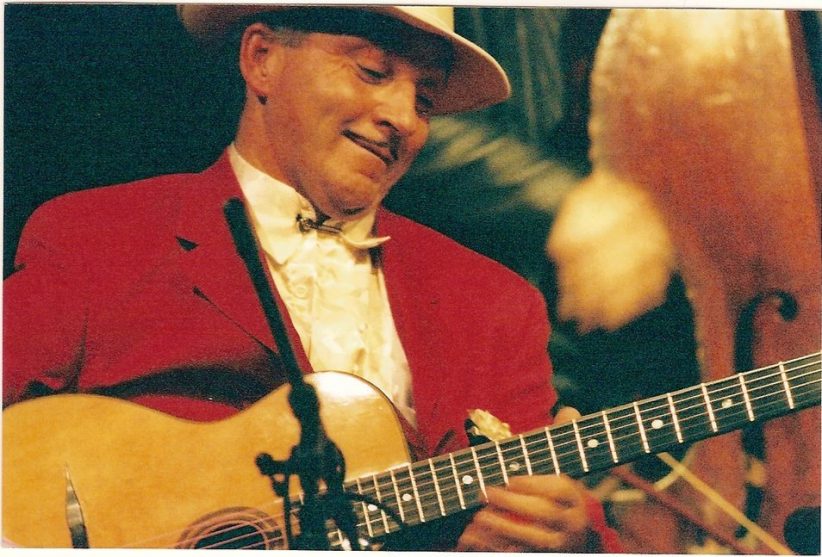 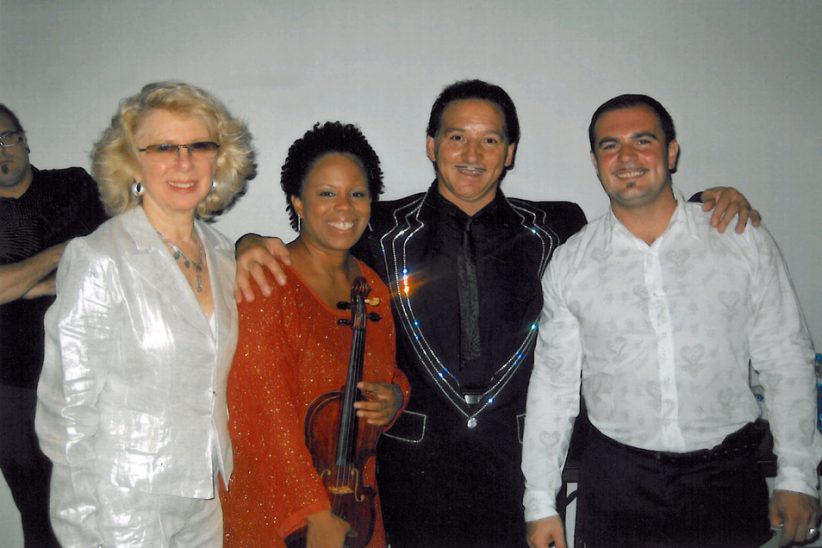 In an extension of the Django Reinhardt Festival that takes place in the fall every year at Birdland in NYC, the Django All-star tour is celebrating Django’s 100th birthday (which is on January 24, 2010) with a series of performances at Iridium in NYC, the Kennedy Center in Washington, DC, the Dakota in Minneapolis, Yoshi’s in Oakland, Kuumbwa in Santa Cruz, Catalina’s in Los Angeles and venues in other cities. The feature attraction of the shows is Dorado Schmitt, the noted gypsy guitarist, who will be accompanied by his son Samson Schmitt (guitar), Marcel Loeffler (accordion), Pierre Blanchard (violin) and Brian Torff (bass). Many of the shows also feature special guests, such as David Grisman at Yoshi’s in Oakland.

The tour is being produced by the venerable production team of Pat Philips and Ettore Stratta. The two have been involved with producing shows with Gypsy musicians for many years. Philips told JT that it all started with Stephane Grappelli, the violinist who first came to prominence as a member of Reinhardt’s renowned and influential Hot Club Quintette. “Back in 1988, we produced Stephane’s 80th birthday concert at Carnegie Hall. That concert included Yo-Yo Ma as a special guest. We went on to produce concerts for Stephane’s 81st, 83rd and 85th birthdays. And we did his memorial concert, which included lots of great guitarists.”

It was Grappelli who tipped Philips and Stratta to the guitarist Jimmy Rosenberg and started a road of discovery that continues to this day. “Stephane told us, ‘You have to go to Holland,’ remembered Philips. “So we did and we went to the gypsy camps and met so many interesting musicians.” Backstage during the memorial concert for Grappelli, in the excitement of the moment someone suggested to Philips that she should do a Django festival. “I said that I would have to sleep on it, but when I woke up in the morning, I said to Ettore, ‘let’s do it.’ See, I loved the music so much.”

They produced the first Django Reinhardt event at Birdland in 2000, featuring Rosenberg, Bireli Lagrene and Babik Reinhardt. Philips got the blessing of the folks at Birdland to go along with her vision for an event celebrating the legendary guitarist. “That first year, we had people lined up on 8th Avenue. We recorded it and Ahmet Ertegun was there.” They had not only discovered a passion for themselves but they were helping to make it a phenomenon in the U.S. They next year they brought different people to Birdland with the same results at the box office.

Philips remembers clearly that 2002 was the year that they brought Dorado Schmitt to the U.S. “He was the guitarist. He had such charisma and he played so great. He could compose and arrange the music. He was the kind of guy around whom everything revolved. He knew how to make a set work with different musicians.” Philips is thrilled that now audiences throughout the U.S. will get to see this unique musician live in concert.

“You know, wherever we bring this music, it’s done well,” explained Philips. “At the Kennedy Center in Washington, DC, it’s always been a hit. See, the pulse of the music is everywhere. The audience comes away with the idea that there can be a lot of joy in the music. It’s joyous, upbeat and swinging-all the qualities you want in life. And all ages can relate to it. It brings a smile to your face, because it shows that music can still get inside your heart and uplift your spirit.”

Philips said that the musicians have such a great rapport with each other that it translates directly to the audience. “It really feels like a party atmosphere. You feel like you’re part of the show, because they’re having such a great time. The musicians smile and they play to each other. You can’t help but feed off that energy.”

It’s impossible to talk about Gypsy music without talking about Gypsy culture, which has been subject to much negative attention in Europe, but Philips said that she has seen firsthand that their commitment to their family and community is very strong. “Sure, they move. If they want to go to France for a few weeks, they go. They have this sense of free spirit and get-up-and-go, yet at the same time they have a code that they live by, as family, that’s special. That’s something we learned from our time with them. They really believe that all generations should be together” That multi-generational credo can make for great music, as in the case of the father-son relationship between Dorado and Samson.

When I asked Philips if there was one single artist who best represents Django’s legacy, she doesn’t hesitate. “Dorado Schmitt. Definitely. He’s got it all. He has a star quality, plays great, is a wonderful composer. I’ve seen him write an arrangement for a new song in order to play with the great violinist Flourin Niculescu, one half-hour before the show. It was incredible.”

If it sounds like Philips is dedicated to the music she and Stratta are presenting, you’re hearing right. “What draws us is a passion for this music. There’s something about it that gets under your skin.”

If you can’t get to any of the shows making their way during Reinhardt’s centennial, you can learn more about the performers, as well as purchase DVDs of the festival at the producers’ web site. They’ve also just released a new CD available now at the site.

Here are the rest of the upcoming dates:

The iconic Django Reinhardt is portrayed in a new biopic, titled simply Django and starring Reda Kateb as the legendary Gypsy-jazz guitarist. The film, which takes … END_OF_DOCUMENT_TOKEN_TO_BE_REPLACED

Through eBay, fusion innovator John McLaughlin is auctioning off the custom double-neck PRS guitar he has played throughout the “Meeting of the Spirits,” his historic … END_OF_DOCUMENT_TOKEN_TO_BE_REPLACED

Collings Guitars, based in Austin, Texas, has announced a new Julian Lage signature model guitar – the Collings OM1 JL. With a design that pays … END_OF_DOCUMENT_TOKEN_TO_BE_REPLACED

Dates for “Meeting of the Spirits,” John McLaughlin’s first extensive U.S. tour in seven years and final Stateside tour, have been announced, and will run … END_OF_DOCUMENT_TOKEN_TO_BE_REPLACED