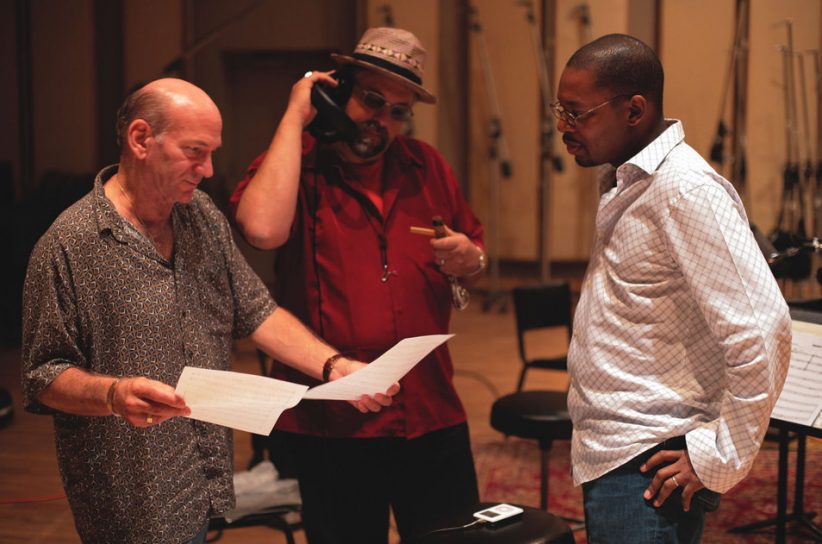 Mr. Liebman wrote that “on the anniversaries of Coltrane’s recording of this seminal piece (November, 1965) I like to find a way to perform it somewhere in the world…saxophonist Gunnar Mossblad, who has collaborated with me on many works over the decades, wrote an arrangement of the suite for the studio orchestra at Manhattan School of Music. Studio orchestra means a full symphonic orchestra with the addition of a jazz rhythm and saxophone section, so you get the best of both, This was a spectacular arrangement conducted by Justin DiCioccio with 85 musicians…The power of Gunnar’s arrangement was incredible and Justin really got these mostly straight-laced young classical players to loosen up a bit for some great moments of group free improvisation. And it is the free improv alongside the beautiful melodies from the suite that gives the music its special yin-yang character.”

I documented the 2007 concert on video, including this excerpt that features pianist Phil Markowitz and Joe Lovano.

UPDATE: The program has now ended, but if you missed some or all of it, don’t worry—just go to https://www.arts.gov/honors/jazz to watch a full archived version. … END_OF_DOCUMENT_TOKEN_TO_BE_REPLACED

JazzTimes turned 50 in 2020, and we commemorated that milestone in our December issue with two lists of the past 50 years’ 50 best jazz … END_OF_DOCUMENT_TOKEN_TO_BE_REPLACED

He’s best known as a vibraphonist, but Warren Wolf is also adept at several other instruments, including marimba, piano, and drums. Join us as Wolf … END_OF_DOCUMENT_TOKEN_TO_BE_REPLACED

With his September 1, 2018 passing, the jazz world lost a singular pianist-composer-bandleader and endless seeker of the African essence of music and spirituality. This … END_OF_DOCUMENT_TOKEN_TO_BE_REPLACED