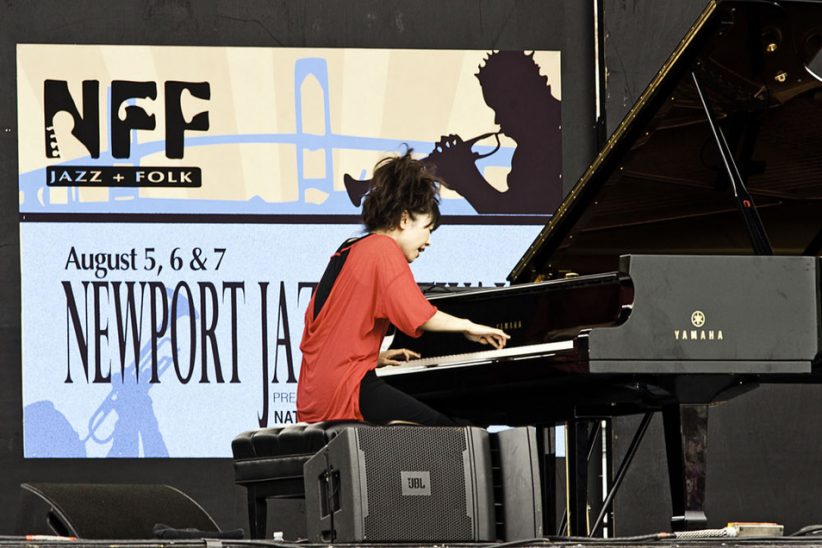 During the 2011 Newport Jazz Festival, JazzTimes set up a make-shift video production studio backstage inside the old barracks of Fort Adams. During two afternoons, a succession of artists-including Hiromi, Esperanza Spalding, Ambrose Akinmusire, Mostly Other People Do the Killing, Miguel Zenon and many others-came in to talk about the festival, jazz education and their own projects. We will be posting these interviews at jazztimes.com over the next few months. You can also see more of these video inteviews at the JazzTimes YouTube channel.

In only a period of a few years at Newport and elsewhere, pianist Hiromi (Uehara) went from exciting young artist to established marquee act. When she first appeared at the Newport Jazz Festival, Hiromi performed on the smallest stage, yet created such a palpable buzz and electricity that it felt like a mainstage headliner playing a small club. Cut to just a few years later and Hiromi has in fact become a mainstage act, and as a solo artist, no less. At the 2011 Newport Jazz Festival she performed two sets-one solo and another with a “power trio” with Anthony Jackson on electric bass and Simon Phillips on drums. Her appearance at the merchandise tent to sell CDs and sign autographs prompted the longest lines for any of the weekend’s performers.

In the cover story for the January/February 2010 issue of JazzTimes, Hiromi told Jeff Tamarkin that playing solo has become important to her development as a jazz artist. “I think for every pianist it’s one of the biggest challenges to just be with piano, just the two of us, to face it and understand how I really play, to listen to myself fully, with nothing else,” she said. “I want to keep recording solo at least once every 10 years.” She returned to that theme at Newport, talking about the difference between playing solo and playing with a band.

In this interview at Newport, Hiromi also discussed her professional and personal response to the aftermath of the tsunami in Japan and why she took extra effort to use her music to have some impact on the recovery. And she talked about her own musical education and her teachers and mentors, including Chick Corea, with whom she has performed and recorded.

The video was recorded by Melissa Mergner.

UPDATE: The program has now ended, but if you missed some or all of it, don’t worry—just go to https://www.arts.gov/honors/jazz to watch a full archived version. … END_OF_DOCUMENT_TOKEN_TO_BE_REPLACED

JazzTimes turned 50 in 2020, and we commemorated that milestone in our December issue with two lists of the past 50 years’ 50 best jazz … END_OF_DOCUMENT_TOKEN_TO_BE_REPLACED

He’s best known as a vibraphonist, but Warren Wolf is also adept at several other instruments, including marimba, piano, and drums. Join us as Wolf … END_OF_DOCUMENT_TOKEN_TO_BE_REPLACED

With his September 1, 2018 passing, the jazz world lost a singular pianist-composer-bandleader and endless seeker of the African essence of music and spirituality. This … END_OF_DOCUMENT_TOKEN_TO_BE_REPLACED