CELEBRATING
50 YEARS
Skip to content
Home > Audio & Video > A Night at the Movies, Cheek to Cheek, JT Video Premiere, Svetlana, Wycliffe Gordon > JT Video Premiere: “Cheek to Cheek” by Svetlana featuring Wycliffe Gordon
JazzTimes is honored to present the premiere of the video for “Cheek to Cheek” by Svetlana featuring special guest Wycliffe Gordon. The Russian-born vocalist’s new version of this Irving Berlin chestnut from the 1935 film Top Hat will appear on her upcoming second album Night at the Movies, a 14-track collection of songs that span a century of cinema, scheduled for release on September 20.
The inspiration for the arrangement of this track, written by drummer Rob Garcia, was the classic duet version of the same tune by Louis Armstrong and Ella Fitzgerald. Gordon takes the Louis side, doubling on trombone, while Svetlana nods to Ella. Also present are trumpeter Jon-Erik Kellso, multi-reed player Sam Sadigursky, pianist John Chin, and bassist Elias Bailey. Musicians who appear elsewhere on the album include pianist Sullivan Fortner, guitarists Pasquale Grasso and Chico Pinheiro, trombonist Michael Davis, drummer Matt Wilson, and percussionist Rogerio Bocatto.
“With this track,” Svetlana notes, “I step away from the moody, more contemporary vibe of the first two tracks [on Night at the Movies] and transport the listener further back in time, to the dance ballrooms of the ’20s and ’30s—and also to my roots as a hot jazz and swing vocalist leading my traditional jazz band, playing late-night dance parties for the throngs of lindy-hoppers at the historic Back Room speakeasy on New York’s Lower East Side, where notorious gangsters Meyer Lansky and Lucky Luciano once presided.” (The “traditional jazz band” to which she’s referring is the Delancey Five, with whom she recorded her debut album A Night at the Speakeasy, released by Origin in 2015.)
Svetlana and Gordon also pair up vocally for one additional track on Night at the Movies: a bluesy take on Pharrell Williams’ “Happy” from 2010’s Despicable Me. Among the other songs on the album are “Pure Imagination” from 1971’s Willie Wonka and the Chocolate Factory, “When You Wish Upon a Star” from 1940’s Pinocchio (featuring Fortner), a Gil Goldstein arrangement of “It Might Be You” from 1982’s Tootsie, and Stephen Sondheim’s “Sooner or Later” from 1990’s Dick Tracy (featuring Wilson).
On September 21 at Joe’s Pub in New York, Svetlana will put on a concert celebrating the release of Night at the Movies. A full U.S. tour will follow, with dates to be announced soon.
Go here to pre-order Night at the Movies.
Share This:
Share to Facebook Share to Twitter Print this Article Share to Email 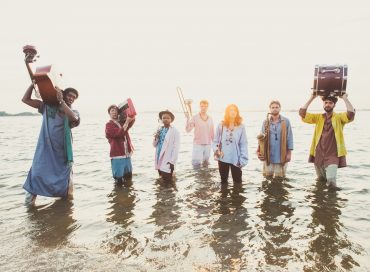