On his new album, Layers of the City, bassist, composer, producer Ben Allison and his group focus on melody, groove and texture in equal measures, engaging in the kind of group interplay that has become a hallmark of their style. Composed, arranged, produced and mixed by Ben, Layers of the City is a true tour-de-force by an artist who’s always pushing the boundaries of his self-expression. It’s his 12th album as a leader and 2nd to be release on his label Sonic Camera Records. 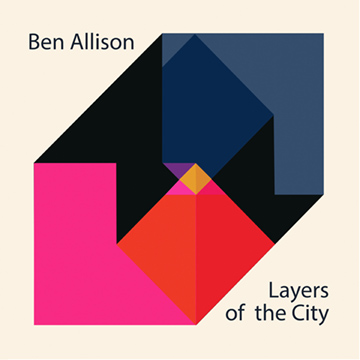 “Layers of the City is a title that has a lot of meaning for me,” said Ben. “The ‘City’ in this case is New York, my home, where my parents were born, and where their parents arrived as immigrants. The people who live here are from everywhere. The layers of the city are reflected in the grime and uneven slope of old tenement buildings, the gleam and perfect angles of modern glass structures, the makeshift and the honed, the worn out and the state of the art, and everything in between. These juxtapositions, coupled with the cultural diversity of NYC, produce a unique kind of energy and vitality. This is why I live here.”

JazzTimes is proud to present “The Detective’s Wife,” the 5th track from Layers of the City.

On April 22, the world observed the 100th birthday of the great Charles Mingus. Among those celebrating in particularly appropriate style were the members of … END_OF_DOCUMENT_TOKEN_TO_BE_REPLACED

JazzTimes is honored to premiere a new rendition of a John Coltrane gem: “Syeeda’s Song Flute,” as performed by the Daniel Rotem Quartet. The track … END_OF_DOCUMENT_TOKEN_TO_BE_REPLACED

JazzTimes is honored to present the premiere of “Path to Macondo/Those Kind of Blues” by keyboardist, flutist, vocalist, and composer Brian Jackson. The track is … END_OF_DOCUMENT_TOKEN_TO_BE_REPLACED

JazzTimes is honored to premiere the video of “Make It Last” by vocalist Catherine Russell. The song, written by Dick Haymes and Bill Paxton, will … END_OF_DOCUMENT_TOKEN_TO_BE_REPLACED