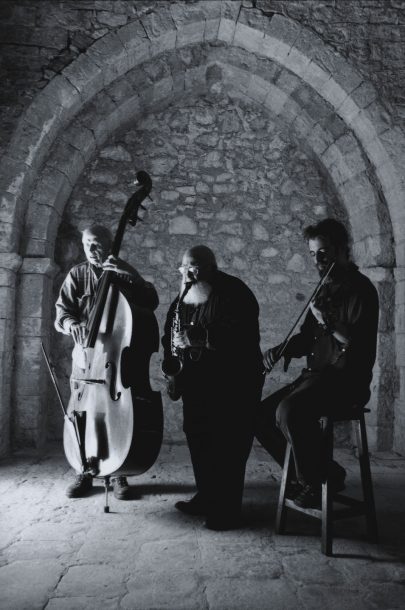 Music is holistic. It has the power to move people on a multitude of levels. Through my voice I want to be able to probe people to think and expand their preconceived conceptions about the voice. The voice is the one instrument which can communicate to all, crossing any existing barriers; language, sex, age, class or race.”

Miles Griffith’s non-traditional use of the voice as a percussive instrument, combined with an uncanny harmonic sense has made him a prime choice for many musicians.

In 1994, he played the lead role of “Jesse” in Wynton Marsalis’, celebrated Blood On The Fields, the specially commissioned jazz oratorio, which premiered at Lincoln Centers’ Alice Tully Hall. Griffith also participated on the recording, which was released on Sony Music in mid 1997 to end Marsalis’ Pulitzer Award and Grammy winning world tour.

Griffith has been a jazz vocal educator for 29 years, having a Masters of Jazz Vocal Performance Degree from Queens College, Bachelor of Fine Arts degree from Long Island University and teach as a private instructor. May of 2012-2013, Griffith taught for the New York Pops organization. June of 2011 through June 2012, Griffith worked as a Vocal Jazz Instructor at New York Jazz Academy. He also taught as the Vocal Jazz Professor at Queens College Jazz Department from February 2008 to February 2009 and 7 years at City College Jazz program. Griffith taught 3 years at Columbia University (2005-2008), on and off for 22 years at the New School Jazz and Contemporary Music, 6 years at Jazzinty in Novo Mesto, Slovenia, 1 year in Izola, Slovenia with the Plesni Dance School and 1 year at the Groningen Conservatore in the Netherlands. He brings his performance energy to the education realm to excite, encourage and empower his students.

Miles Griffith and Tony Pancella Trio have been playing and touring Europe for over 17 years. With three CD’s under their belt, “I Found You,” “Smile Again” and “The Struggle Never Dies,” they’re planning to record their fourth CD in 2016. You can visit their site at: https://myspace.com/griffpan/music/songs The Miles Griffith and Tony Pancella Trio has such a dynamic chemistry on stage that you will be amazed. Plus you’ll leave with an unforgettable musical experience.

Besides Griffith’s four stateside groups, Miles Griffith New Ting, the Miles Griffith Quartet, Melvin Vines and Kay Mori Harlem Jazz Machine group featuring Miles Griffith and Prime Directive he has three more dynamic European Band projects and they are: Fine Noise featuring Miles Griffith, www.myspace.com/finenoise, over 22 years of musical collaboration with Miles Griffith/Michael Jefry Stevens Group, http://michaeljefrystevens.com/griffith/stevens-quartet.html and Robert Jukic and JR+5 featuring Miles Griffith http://www.robertjukic.com/Robert_Jukic/home.html. You can search and purchase their music on the world wide net. Tommy Campbell’s Vocal Eyes, www.youtube.com/watch?v=yxj8YVrSzNI, which Miles sang for 18 years till summer of 2014, and was an original member since 1996 performing around the Tri-State area. In 2014, Miles joined two new groups, one in May 2014, called Yoron Israel & Key Players www.yoronisrael.com and in November 2014, Gerry Eastman’s Williamsburg Music Center Band http://wmcjazz.org/calendar/ on Friday nights at the Williamsburg Music Center in Brooklyn. Both groups are tight, organized, energetic, swinging and grooving groups that features the bandleader’s compositions and hallmark favorites. Now Miles teamed up with Guitarist Faton Macula in June 2015, and the Faton Macula/Miles Griffith Duo have started a wonderful musical journey together performing in the Tri-State area. Be on the lookout for their Duo CD in 2016.

As for Miles Griffith’s future plans, he states, “I plan to put the voice back on the scene as the ultimate first instrument.”

Yazhi Guo, received his Artistic Diploma from Berklee College of Music 2015, is widely known as “THE” best Suona player in Asia. He graduated from … END_OF_DOCUMENT_TOKEN_TO_BE_REPLACED