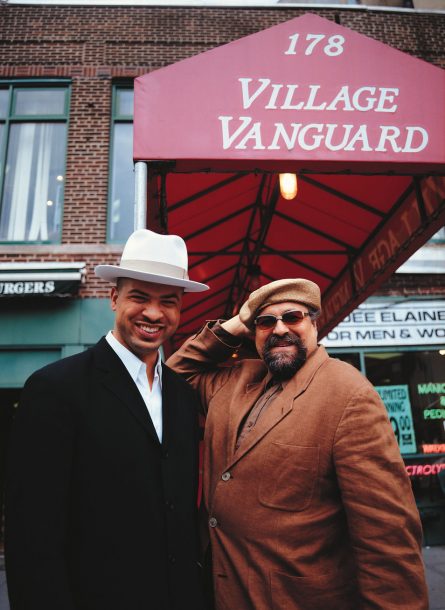 Joe Lovano and Jason Moran outside the Village Vanguard 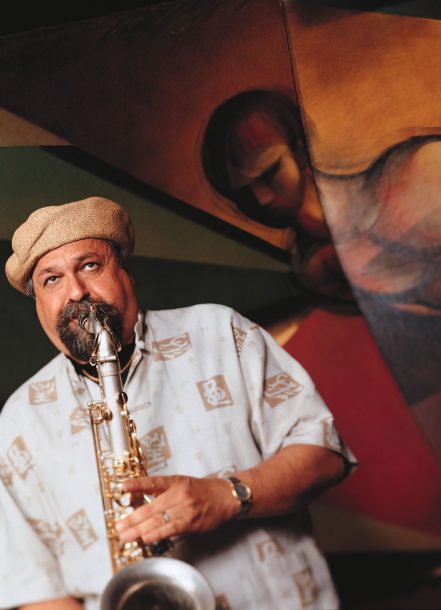 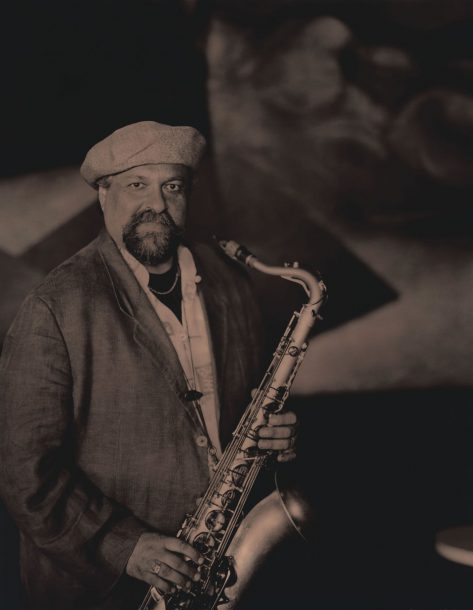 There’s a new voice on the saxophone, forged in the gritty steel town of Pittsburgh. Her name is Chelsea Baratz and at 24, her soulful sound is a fiery combination of be-bop swing and hip hop hooks. Her debut release “In Faith” illuminates the distinctive tenor of an emerging player and original composer. She’s a band leader whose music follows in the footsteps of 1960’s soul jazz and the hard bop roots of her hometown. Innovative and ear-bending with a sizzling originality to her horn, Baratz’s music is heartfelt, simple in its power to bridge quiet moments with bursts of fiery improvisation. When she picks up her saxophone, the soul of her own life comes alive. It’s a reflection of the obstacles she’s overcome and provides a backbone to her music. On “In Faith”, it’s evident that she is no stranger to pain, struggle, love and loss. These experiences are gracefully embued in her music. Or as Baratz simply states:

“Art mirrors life, and music expresses what words can not. It’s vital for people to know that I’m here to bring the soul and feel-good back to jazz music and bridge the gap between artist and listener.”

Her debut album, “In Faith”, produced by trumpeter Maurice Brown, brings this powerful message home. Baratz’s inventive sound and vibe carries forward the past echoes of Pittsburgh’s gospel, blues and soul heritage into the present day. On “In Faith”, she catches the ear of listeners with nine original compositions, ending with a Fela Kuti tribute. Nine songs with the weight of conscious, as well as a propulsive beat. Compositions that reveal the young artist’s strong roots in the jazz tradition while incorporating influences from R&B, hip-hop, gospel, contemporary jazz, and blues. In addition to Maurice Brown’s presence as a producer and player, “In Faith” boasts a roster of Corey Wilkes on trumpet & flugelhorn; Orrin Evans & Mike Murray on piano; Richie Goods & Luques Curtis on bass; Obed Calvaire, Jevon Rushton & Joe Blaxx on drums as well as special guests Renee Nuefville (vocals), Chris Rob (vocals/Moog synth), Raymond Angry (keys) and Craig Handy (flute). Her first album as a band leader displays a confident artist who intuitively gathered the right musicians together in the studio to cultivate her distinctive sound, resulting in a “recommended pick” by Jazzchicago.net (http://www.jazzchicago.net/reviews/2010/QuickHits6.html).

As a teenager, Baratz became a regular on the Pittsburgh jazz circuit, playing with the likes of legendary hard-bop drummer Roger Humphries, bassist Dwayne Dolphin and trumpet giant Sean Jones. She honed her craft with the guidance from the best of the Iron City’s local musicians, as well as a brief interlude with saxophonist Branford Marsalis. Intent on continuing Pittsburgh’s jazz legacy, Baratz moved to New York at 19 to attend the New School for Jazz and Contemporary Music on a scholarship.

Early in 2006, Baratz emerged as a band leader upon meeting trumpeter Corey Wilkes. Wilkes, the Chicago native with his own searing polish, joined her on stage in Pittsburgh for Baratz’s first live recording. This would mark the start of a long-running musical collaboration between the duo. Baratz hooked up with Wilkes in Chicago to play with his quintet, performing at Millennium Park as a special guest with the Chicago Young Lions Project, alongside the legendary Jimmy Cobb & Von Freeman.

In New York, she met trumpet virtuoso and producer Maurice Brown. Brown was impressed by Baratz’s playing and magnetic personality. She joined him in the studio to record “Mobetta & Soul’d U Out: The Official Mixtape” (Brown Records), Brown’s stellar 2007 release. 2007 was a busy year for Chelsea: she played on Aretha Franklin’s album, “Jewels in the Crown” and performed at the Sisters in Jazz collegiate all-stars IAJE conference in New York, the Mary Lou Williams Women in Jazz Festival at the Kennedy Center in Washington, D.C. and the Costa Rica International Jazz Festival in San Jose, Costa Rica. In 2008 she was featured as an artist & composer on Wilkes’ album, “Drop It” (Delmark Records).

“I’m a messenger, this is a movement. I’m on a mission for this music. I’ve traveled all over searching for this feeling in the music. That search is what first took me to Chicago, what brought me to Corey Wilkes, brought me to NYC, lead me to Maurice Brown, who’s at the forefront of this new Soul Jazz movement. It lead me to New Orleans to go down there in the grimiest of situations to immerse myself in the music I’m in search of.”

Her life is her music.

Yazhi Guo, received his Artistic Diploma from Berklee College of Music 2015, is widely known as “THE” best Suona player in Asia. He graduated from … END_OF_DOCUMENT_TOKEN_TO_BE_REPLACED