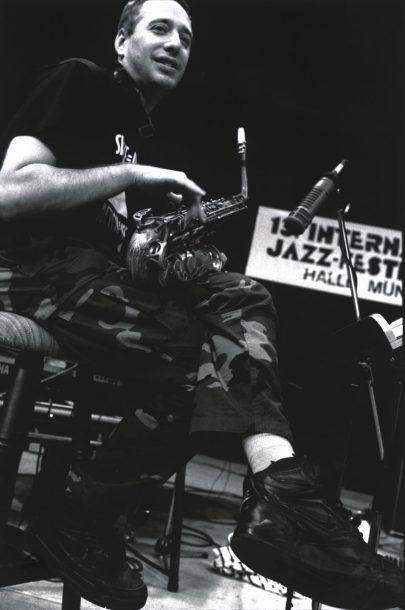 John Zorn is over 50 but could pass for 35. Clad in camouflage pants and a bright orange T-shirt, with tzitzit (tassels, worn by Orthodox Jews) hanging from his waist, he took the stage at Columbia University’s Miller Theater to do a pre-concert interview. George Steel, Miller’s executive director, knew Zorn’s oeuvre backwards and forwards and was able to engage the notoriously prickly composer in focused conversation for nearly an hour. What prompted Zorn to write music for string quartet? “It’s like guitar/bass/drums. It’s one of the few forms that’s still kicking ass.” Why doesn’t he write concert music for the saxophone? “Because it sounds like shit.” And from the audience: Would he care to discuss his work with the Japanese noise-rock band The Boredoms? “Fuck you.” Oddly, this didn’t sound disrespectful; it was more like a playful poke in the ribs. Behind the profanity and general outrageousness lies a sensitive, serious and bewilderingly gifted musician, with an output that may well be huger and more diverse than anyone alive.

The Miller Theater, by the way, is a treasure, where one can hear everything from Brahms to Conlon Nancarrow for about $20, all season long. The presentations are offbeat and inventive. Steel not only gets why classical music still matters; he also knows how to explain it to a new and growing audience. Zorn attracted an especially big and youthful crowd, but the ambitiousness and high-level performances were not out of the ordinary for this inspiring venue.

Leading off was the world premiere of the complete “Mysterium” cycle, beginning with “Orphée” for flute (Tara Helen O’Connor), viola (Richard O’Neill), celeste and harpsichord (Stephen Gosling), harp (June Han), percussion (William Winant) and live electronics (Ikue Mori), with Brad Lubman conducting. The piece was jagged and abstract, yet articulated by all with an inviting softness of touch and texture. “Sortilège,” a 2001 piece for two bass clarinets (Michael Lowenstern and Tim Smith), was the piece that came closest to free jazz, although every blistering run, bend, slur and lingering dissonance was painstakingly notated. The virtuosity of the two players left the crowd aghast. “Frammenti del Sappho,” a pantonal tour de force for five female voices (Lisa Bielawa, Martha Cluver, Abby Fischer, Kirsten Sollek and Martha Sullivan), was entirely wordless, a profusion of timbres and harmonies — think Palestrina for the space age. The closing movement, “Walpurgisnacht,” for violin (Jennifer Choi), viola (O’Neill) and cello (Fred Sherry), was a tumultuous yet subtle string trio inspired by the witches’ sabbath. It gave an advance taste of the sumptuous chamber music soon to come.

During his talk, Zorn said that “percussion is vital,” that all contemporary composers must formulate their own percussion language. When William Winant opened the second half with “Gri-Gri,” a solo percussion piece first performed in 2000 (and newly revised), it was a chance to hear Zorn’s percussion language up close. This was an athletic performance, with Winant dominating a set of standing tom-toms, a kick drum, a field drum and other assorted items. With great dynamic control and musicality, Winant brought out the African and voodoo elements implied by Zorn’s title (a gri-gri is a good-luck talisman).